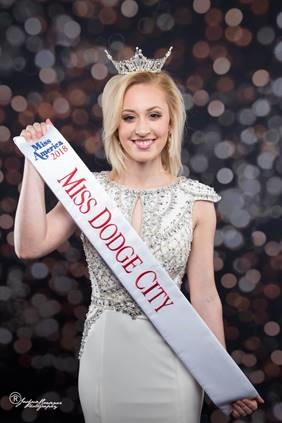 Dodge City, KS–DC3 Cosmetology alum Baleigh Munsell, daughter of Doug and Lorrie Munsell of Ulysses, Kansas, was recently crowned Miss Dodge City 2018. Baleigh became involved with Miss America pageants at the age of 8, when she joined the Sunflower Princess mentoring program. Since then, other pageants that she has competed in include Miss Kansas Outstanding Teen 2014, Miss Southwest 2015 (in which she won local People’s Choice), Miss Kansas (in which she won the Lifestyle and Fitness Competition), and Miss Hay Capital 2016 (in which she won the title).

Participating in pageants has provided Baleigh with scholarship money for college as well public speaking, interview, and leadership skills. She has also been able to help others through raising money for Children’s Miracle Network hospitals and educating people about the importance of agriculture. “I’ve also gained several friends, some of which are my best friends,” Baleigh said.
“We have known Baleigh for several years and we are very proud to have her as a member of Team Dodge,” stated Co-Director, Christina Haselhorst. “Watching her grow throughout the years through these programs has been a joy. It always amazes me how much growth in confidence, leadership, advocacy, and service happens with each and every one of these young women. And it is so rewarding to see them succeed with the help of the scholarships that they receive through the Miss America programs.”
Participating in pageants while attending college presented its own unique challenges, but Baleigh had developed a strategy for managing her responsibilities. “It takes a lot of time management and preparation,” Baleigh said. “It was stressful at times because I was also a dancer and cheerleader. I would definitely say that staying organized and knowing what all I had going on was my life saver.”

Julie Taylor, DC3 Director of Cosmetology was impressed with the quality of effort that Baleigh brought to the classroom each day. “When she arrived to school the first day, we knew right away that she would be a good inspiration to her classmates. She always showed up put together, hair done, make-up done, and a smile on her face. She was always positive with the students and the instructors. She would be willing to help with anything that was asked of her. We are proud of her and her accomplishments and know she will do great in everything she attempts.”
Following her Cosmetology certification, Baleigh immediately began work at a local hair salon. In addition to her new career with Harlow Hair Parlor, Baleigh is a Dance Coach for Diamond Athletics and also helps out with the DC3 Dance Team, which she was a member of while attending Dodge City Community College. DC3 Head Cheer and Dance Coach Kory Kosegi said, of Munsell, “She is very much involved with her community. DC3 Spirit is honored to have an alumni like Baleigh to represent our community as Miss Dodge City.”
While enjoying her reign and all of the duties that it entails, Miss Dodge City has plans to participate in still more pageants, in the future. “Miss Rodeo Kansas is a big possibility this next year, due to my ties with growing up in a rodeo family and participating,” she said. “I’m very confident in saying that Miss Kansas has prepared me for my future, because I have gained so many different skills to be able to carry myself through my career and through daily life.”