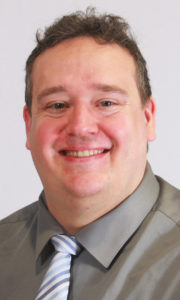 You could say he’s been in sports most of his life. The youngest of four boys, he watched his older brothers excel. He grew up in Maple Grove, Minnesota and graduated from Osseo High School. After a community college stint he eventually earned his bachelor’s degree in sports management from Bemidji State University.

“I always knew I wanted to work sports, but I knew early on that I didn’t really have a future in playing,” he laughed.

During his time at Bemidji State, he was put in charge of several gameday management situations and the experience solidified his career path.

“From there I really knew I wanted to be on the administrative side of athletics,” he said.

He then worked as the athletic director for LaPorte High School for a time before being put in charge of gameday promotions for the Saint Paul Saints, an independent league professional baseball team noted for its often peculiar promotions.

Between innings, game balls are traditionally brought out by a trio of pigs, and in 2015 the organization hosted the world’s largest pillow fight during the seventh-inning stretch. One game was played without umpires – with a judge in robes and gavel calling balls and strikes from behind the mound, and a “jury” of 12 Little Leaguers calling plays on the bases.

He said when he was searching for the job, Dodge City was just about the outer limits of distance – he wanted to stay close to his roots.

“I just like the Midwest,” he said. “When you go elsewhere there’s a big difference. I think that at the core people are just nicer in the Midwest.”

Van Valkenburg-Gernert was married just this past September. His wife Sarah is an elementary education teacher. The couple have moved twice in the last six months, so finding a new job and getting settled in means a honeymoon is being pushed back until summer.

The couple are hoping for a European cruise and a possible visit to the Netherlands and the ruins of Valkenburg Castle.

Like many of Dutch descent, Van Valkenburg-Gernert knows at least a little of his family tree. He has an aunt who’s traced the family lineage back hundreds of years. Somewhere down the line he is a cousin to Vincent Van Gogh – but that’s where the relation stops.

“I can’t paint or draw at all, but I used to sing in the choir in college,” he said. “But even that’s just in the car or shower now.”

He may not be artistic, but he has a real affinity for athletics and the impact it can have on young lives.

“I love the effect it has on students,” he said. “It’s a form of teaching but you’re teaching relatable life skills like leadership and communication. I think you can develop kids into adults in a different way than you do in a classroom.”