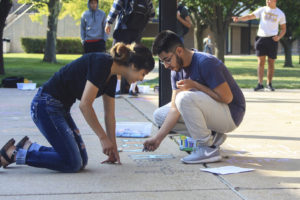 The week of September 10-16 was Suicide Prevention Week. This nationally recognized awareness campaign educates the general public on the warning signs of suicide, shines a light on mental health, and encourages those suffering with thoughts of suicide to seek help.

The DC3 Suicide Prevention Committee organized several events on campus to contribute to the nation-wide effort. Nursing students set up a table, offering positive-message rock painting. The DC3 Library set up a special suicide prevention display, showcasing books and other resources, and providing free yellow ribbon lanyards, pins, and bracelets. The Art Club and Art Design classes drew murals on the concrete walls with chalk. Chalk was also made available to students, campus-wide, at various locations, to join the College Orientation classes in leaving messages of hope on the sidewalks. DC3 SGA handed out snacks along with chalk to those interested in participating and Phi Theta Kappa students handed out scrolls of positive messages and flowers to passersby. Many DC3 students also signed up to participate in the city’s 4th annual Alive and Running 5K.

“In Kansas, suicide is the number two cause of death for teens,” stated Karen Gustavson, Connection Center Director and Suicide Prevention Committee member. “At DC3, four student groups, one department, at least ten classes of students and faculty, and many staff participated in the various activities held on campus. Our goal was to show the yellow ribbon as a lifeline if you need help.  It carries the message that there are those who care and will help!”

Be a link, save a life. If you or someone you know is feeling suicidal, there is help. Call the National Suicide Prevention hotline at 1-800-273-8255.

Check out the pictures taken by Justin Wilson.