Four to be inducted into DC3 Hall of Fame 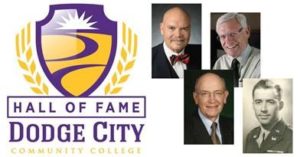 Saturday, November 18th, four DC3 alumni will be inducted into the DC3 Hall of Fame. Since 1986, Dodge City Community College has recognized 56 total alumni, faculty, and friends for their exemplary contributions to the institution as well as the community. The three categories awarded are for Outstanding Service, Outstanding Volunteer Service, and Outstanding Career Achievement.

Mr. Wetmore was able to provide the following information about the newest Hall of Fame inductees:

Dave Rebein is a local attorney that has been an active supporter of the college.  Mr. Rebein served on the Board of Trustees from 1998-2005 and volunteered in many ways for the college including being a past commencement address speaker. Dave Rebein and many of his family are alumni of Dodge City Community College.

W.R. Robbins attended Dodge City Community College and played football for the institution.  Mr. Robbins returned to Dodge City to teach after completing his Bachelor’s Degree.  He later made a career change and got into the banking industry. Mr. Robbins is the CEO and Chairman of the Farmers Bank and Trust, headquartered in Great Bend, Kansas.  He recently endowed the Robbins Business and Leadership Scholarship for DCCC students.

James Maag taught History at Dodge City Community College before going on to serve the state of Kansas as the Assistant Secretary of State, Assistant Majority Leader, and Speaker Pro Tem as the State Representative for the 116th District. Mr. Maag currently serves as the Governmental Affairs Consultant for Foulston Siefkin Law Firm.

Shelvy Lane is receiving his award posthumously.  Mr. Lane attend Dodge City Community College, graduating in 1937.  He designed the original Conquistador logo and played football for DCCC.  Mr. Lane had a successful military career and is buried in the Arlington National Cemetery.

The Hall of Fame induction ceremony and reception will be held Saturday, November 18th, in the Student Union ballroom at 2:30 PM. The event is free and open to the public.