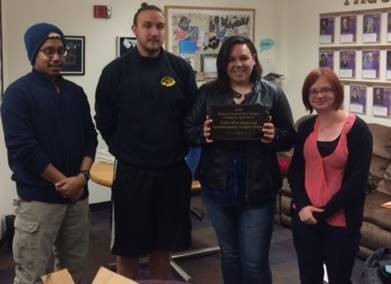 On April 6th and 7th, the Dodge City Community College Quiz Bowl team competed in the Quiz Bowl State Finals in Salina, KS. While the team played well and answered a good number of questions, they ended the day with a record of 2-6 and a 7th place finish.

Emma Wiebe was the top scorer for Dodge, answering a total of 30 toss ups and ending the tournament with a 6th place individual finish. Rounding out the team was Victory Connolly (captain), John Hibler, and Zane Worden. All students on the team put in personal-best performances.

For the second year in a row, the DC3 quiz bowl team was awarded the Colin Matz Sportsmanship trophy for good sportsmanship throughout the tournament. This award is voted on by all the moderators based on their observations of the teams’ behavior and speaks very highly of the students on the quiz bowl team representing Dodge City Community College.

Emma Wiebe and John Hibler will be returning to play again next year and will make a good foundation for rebuilding a competitive team.