By Scott Edger
Exiting the student union, an unsuspecting trio of office workers are startled into giggles when the man sweeping up trash gives them a mischievous hoot from around a corner.

“You’re full of it today, David,” one of the ladies says to the man.

“Ya, just wait till tomorrow,” he pokes back, prompting another surge of giggles.

For the last 16 years, anyone frequenting the main plaza at Dodge City Community College in the mornings has likely been the target of David Burton’s playful scare tactics.

“David really keeps us on our toes,” said Sheri Strawn, a DC3 payroll clerk and longtime friend to David. “He is quite a character. He’s a really great guy.”

David has been working in maintenance for Dodge City Community College since 2002 – nearly as long as anyone else on campus. For as long as he has been with DC3, David has also been competing at the Special Olympics – most recently at the Wichita event in June, winning three medals in the tennis ball throw, track, and 25-meter run.

The Special Olympics is designed to be an inclusive event, helping generate confidence and fulfillment for participants. While the games are fun and inspirational, David doesn’t mess around.

Keeping the campus clean and gently ambushing students and faculty are merely fun pastimes for David – his real passion is sports and he is always eager to debate. Ask him a sports question and he may start rattling off statistics and events from years prior.

Mention professional wrestling and David comes alive. Strawn and David share a love for the high-flying action and personalities as big as David’s. Strawn has hosted David and other friends for big pay-per-view events at her home. She even bought him hat for his favorite wrestler, John Cena, at the last WrestleMania event she attended.

“David will talk your ear off about WWE,” Strawn said. “He’s fun to have around and we just have a really good friendship.” 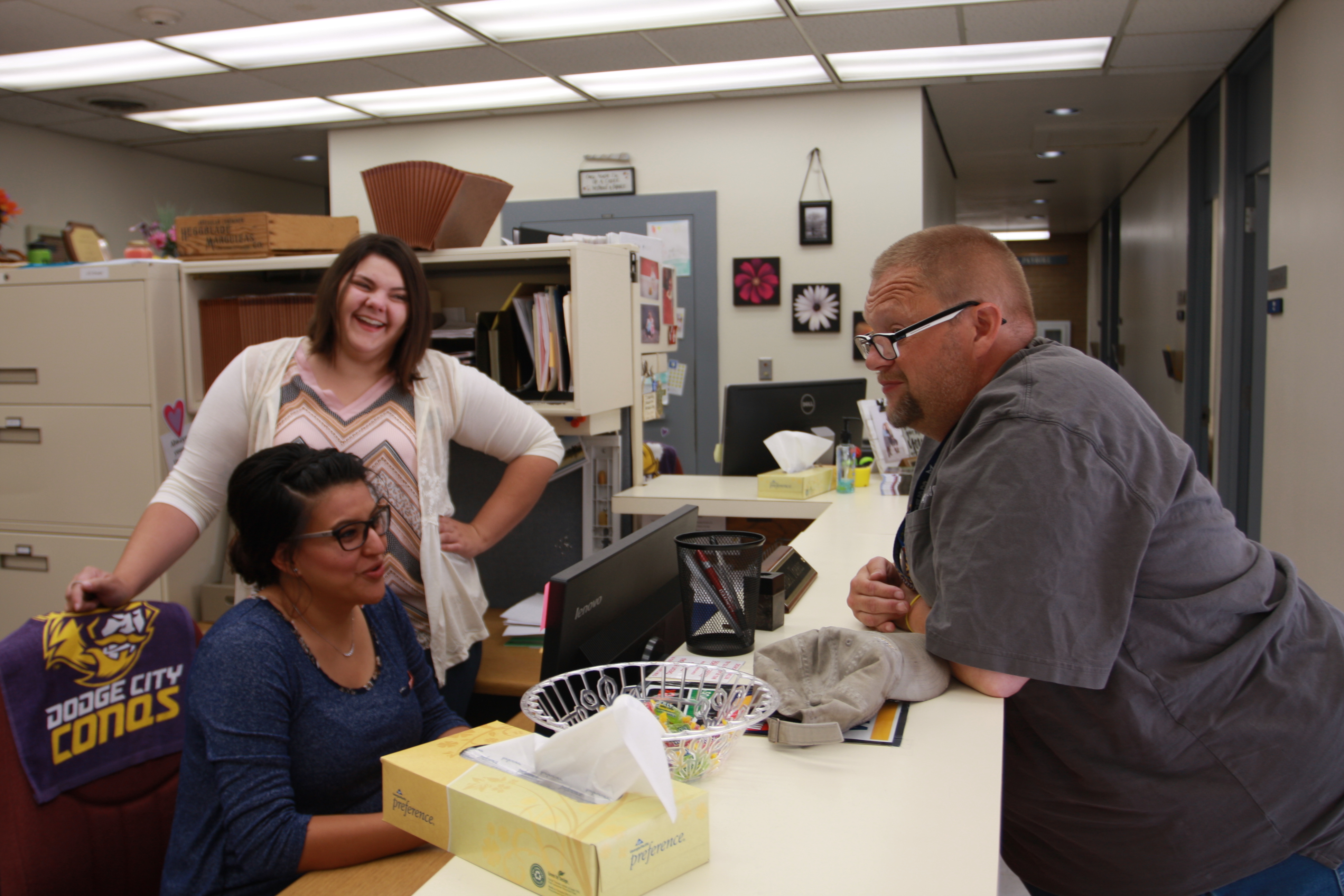 David is a huge John Cena fan who knows all of the intrigue and story lines in pro wrestling. Although he is accomplished as a Special Olympian, David doesn’t think he’ll be doing any wrestling.

“Oh god no,” he laughed. “I wouldn’t make it. Those guys work out. I only get my exercise at work.”

Gregarious and quick-witted, David has big fans among the personnel around the plaza. He’s generous with a welcoming wave and he can be as chatty as a magpie.

“David is just funny and so quick,” Strawn said. “He’s silenced a few people on campus who are usually never short for words. It’s fun to watch him.”

David is a big Conquistador sports fan and attends just about every home football and basketball game –decked out in full Conq gear. He even follows incoming players and makes sure he knows the new coaches and personnel.

While he is always good-natured and affable, he can dish out the smack talk as well as anyone. As an athlete himself, David is willing to exhibit his own brand of swagger and ratchet up his competitive rhetoric. He has repeatedly challenged DC3 women’s basketball head coach Zach Loll to a game of one-on-one.

Aside from his humor and geniality, David is a solid worker. He is carefully observant of his work areas and quick to request maintenance repairs or ask for extra duties. In addition to his job at DC3, David also cleans up around Fidelity Bank and does supply and requisition work at his Arrowhead West group home.

Lots of responsibility and keeping up a steady work ethic are important to David, but he says the most crucial part of his job is more personal.

“The important thing is giving these ladies a hard time,” he laughed. “Everything else can wait.”