Just over three years ago, the Dodge City Community College Board of Trustees began an initiative committed to updating the college’s antiquated heating and air systems.

At Tuesday’s board meeting, the college received an award for the energy efficiency improvements the school has made and heard the results of a study outlining the current and projected savings resulting from those upgrades.

Don Flower of Johnson Controls presented the college with the company’s Environmental Stewardship Award at Tuesday’s meeting, saying the project appears to be a success. 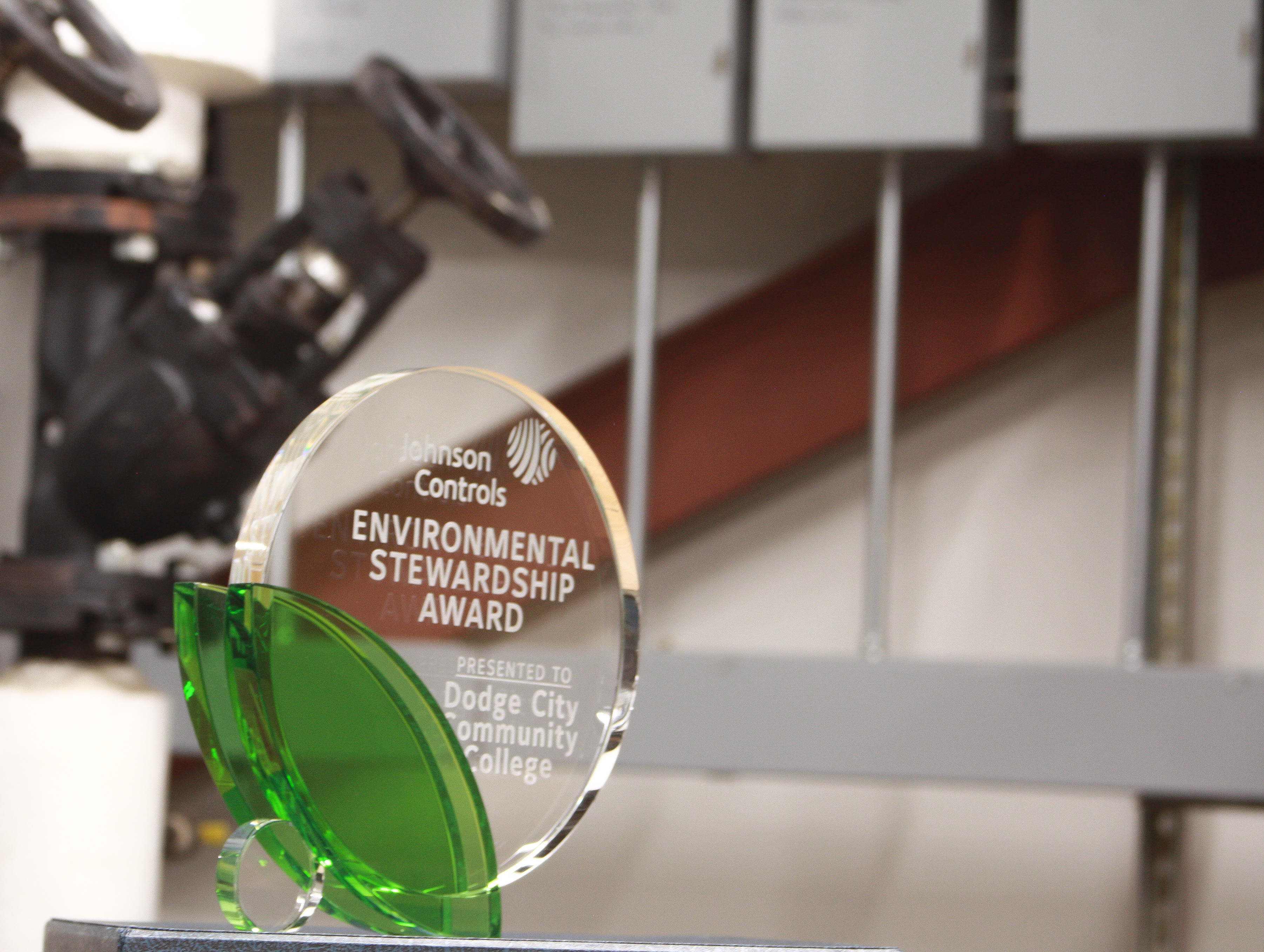 “From the information I have gathered,” Flower said, “Dodge City Community College has some of the most top-of-the-line equipment available. They really did things right. I would expect their savings to continue to grow.”

The board’s nearly $2.5 million investment in new boilers, chillers, and advanced digital control and monitoring equipment has thus far proven quite prudent; actual energy bills for DC3 have plummeted by more than $420,000 since 2015.

The savings for the college and Ford County taxpayers is estimated to be almost $2.5 million over 15 years. The project reflects not only cost savings, but allows DC3 to more responsibly steward natural resources beyond money.

The foresight of this project has allowed DC3 to modernize its HVAC systems and be proactive concerning energy conservation and cost savings. Upgrades include boiler and chiller replacement throughout the campus, replacement of rooftop units, LED lighting upgrades, and optimization of heating and cooling schedules.

Russ McBee, director of facilities and operations at DC3, received the award on behalf of the college and said the new equipment makes energy usage much more efficient than the school’s old system, and the centralized software controlling all of it means school personnel can tweak those systems to achieve even more energy efficiency.

The old equipment had “outlived its useful life,” according to McBee. “There were problems that we were constantly fixing.”

The Metasys system allows precise control of heating and cooling throughout the campus. Through centralized controls, facilities management personnel can control and monitor entire buildings. They set upper and lower temperature control limits, establish and modify uptime and downtime schedules according to classes and events, and they are able to run analytics from the software that can show where potential adjustments could be made to further increase energy efficiency.

“We can maximize our energy efficiency and get on top of problems sooner,” McBee said. “This allows us to have a very managed approach to the whole system.” 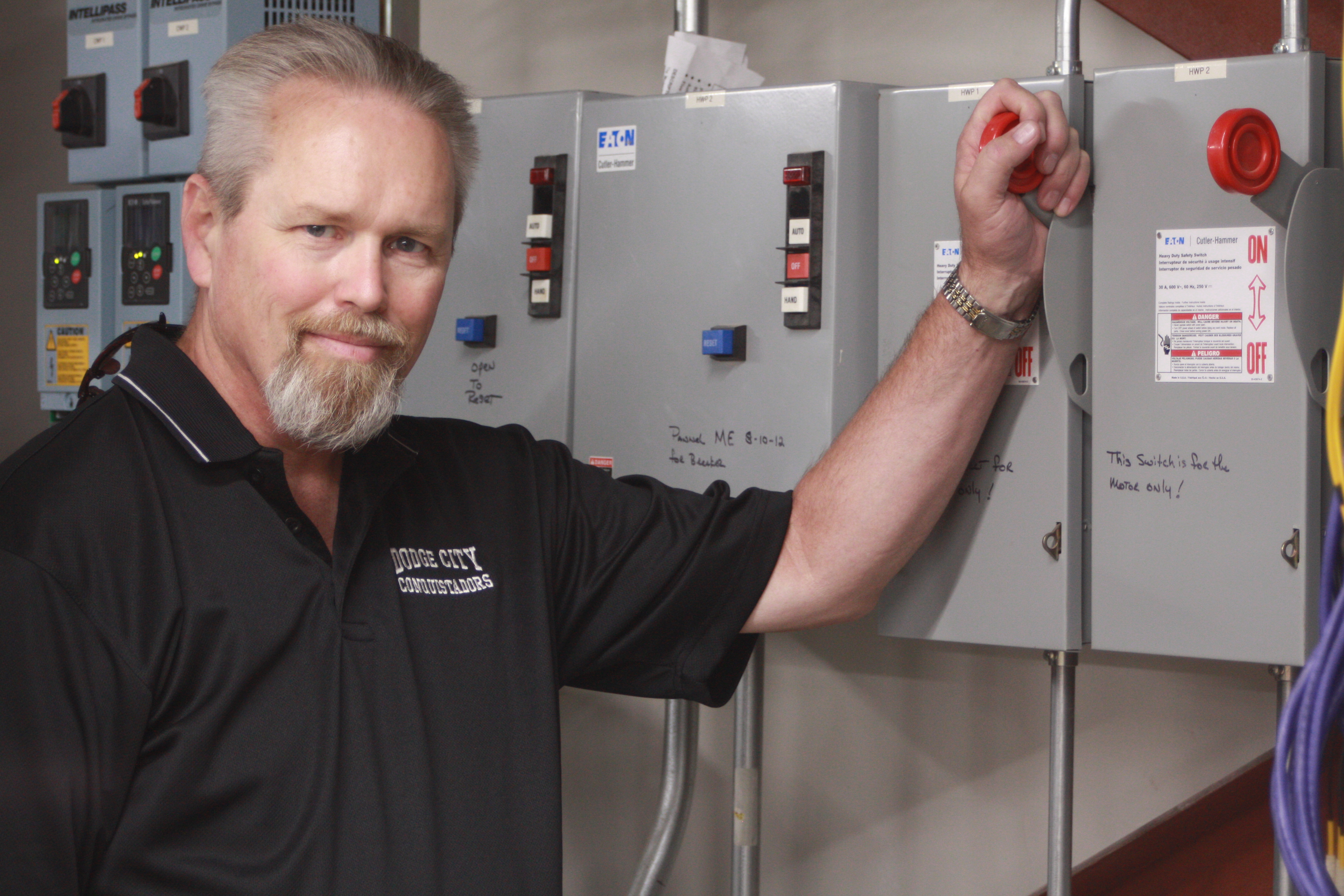 Each building on campus is delineated into zones, each of which can be controlled and monitored at a central location. Facilities personnel can make a few mouse clicks and see the temperature, history, occupancy status, and schedule of every room on campus. Occupants of individual rooms can still adjust temperatures to their own comfort level – just within prescribed limits.

McBee said just about every light on campus has been or soon will be switched over to LED – the most efficient form of consumer lighting that also runs far cooler than other types, placing less of a strain on the school’s cooling systems.

McBee said the remote monitoring and controlling aspect of the Metasys system makes manpower more efficient as well. Instead of getting a late night call just saying power was lost, McBee and others with access receive text alerts telling them exactly where the problem is and relay relevant information so maintenance workers can have a jump start heading off problems.

A recent heat wave stressed electrical systems around the area to their brink, and one Tuesday afternoon with 100-degree temperatures saw a couple buildings on campus lose power. McBee received an alert that they had lost a power phase prior to even receiving a phone call from college staff. McBee was able to make calls to DC3 electrician David Shultz and Victory Electric and power was restored in less than two hours.

The contract for the project was signed in June of 2015 with upgrades commencing immediately thereafter. Installation and renovation was completed in March of 2016.

Flower came onto the project following completion and verified a full year of data from the school’s new Facility Improvement Measures, as Johnson Controls refers to the new equipment. He said all of the equipment is running at or above expected efficiency. Flower also noted the $26,000 in tax savings stemming from the changes.

Trustee Dr. Jeremy Presley was part of the board that originally instituted the updates. The price tag was initially a tough pill to swallow, according to Presley, but the clear return on investment already realized from the updates shows that it was a sensible and well-advised proposal.

“It was a scary project,” Presley said. “We were buying a lot of equipment, so there was a large initial dollar outlay. We had a lot of dated equipment that had outlived its service life.” Presley noted that the college was already well ahead of the projected return on investment for the upgrades.

“This does just what it was expected to do. It is an example of good fiscal responsibility… spending some upfront money saves us money in the long run, and our system is updated before things got totally outdated and broken.”

McGee said the Student Activity Center is on a different system than the Metasys, but there are similar capabilities in that building and college personnel are starting to manage usage and efficiency potential there as well. While offices are wired traditionally, bathrooms and other rooms have automatic lights that sense when someone enters and turn themselves off when they’re not occupied.

Hard work from the maintenance department helped coordinate with employees from Johnson Controls and other contractors to accomplish the project’s goals.

“I’m grateful to all the maintenance personnel and people who worked to get this all accomplished over the summer,” Presley said. “It’s really good to have those things corrected before the students back on campus.”