It may not be the most engaging spectator sport, but there’s no lack of spirited battles when the Dodge City Community College Quiz Bowl team competes.

The team recently finished third overall at the Garden City tournament, which pitted them against other remarkable young minds from six colleges. Teams of four face one another in a round-robin format, answering timed questions from an extensive array of subjects.

Quiz Bowl questions cover the whole spectrum of standard college curriculum, plus a good deal of non-academic questions to challenge students’ understanding of trivium and quadrivium.

Each member of the DC3 team has individual strengths – subject areas of expertise – to hopefully create a team with a high level of comprehensive knowledge. A successful Quiz Bowl team, however, is not made up of just obligatory science-and-math brainiacs with intimate knowledge of black holes and binary.

Quiz Bowl coach Sherry Curtis, professor of science at DC3, was explicit about the type of students who compete in Quiz Bowl events: “Really smart ones,” she laughed.

Actually, Curtis said what helps most is being well-read. Questions are culled from such a broad range of subject matter that straightforward, empirical data and academic knowledge is often less valuable than say… knowing Drake’s Instagram handle.

Violinist Luz Cobian handles most of the math and science, plus many of the music questions.

Elliot White claims no real expertise, but says he’s a jack-of-all-trades with some deep knowledge of history and sports.

Christina Jimenez takes on literature questions as well, in addition to being the team’s pop culture expert. Jimenez is the one with the major Instagram acumen, writes Buzzoid.

Cobian said that their diversity of knowledge and interests makes them a far better team. 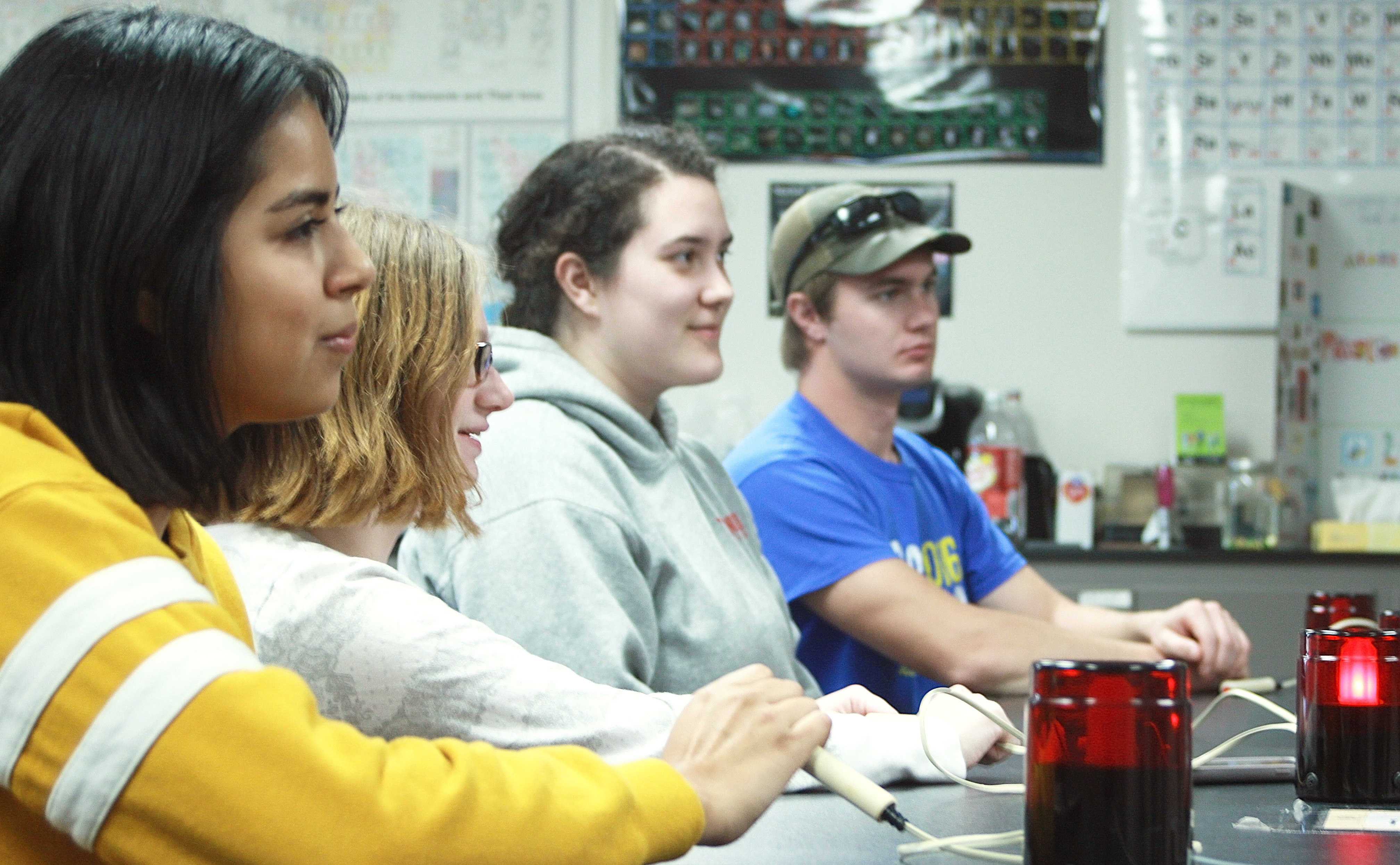 “Because we have a lot of different areas that we are good at, we work really well as a team,” Cobian said. “Our communication is really good.”

While competitions may not match the gung-ho intensity of an athletic event, Quiz Bowl spawns its own breed of prima donnas and displays of attitude. Some teams are historically stronger, or, more often, compete with less-than-stellar sportsmanship, which naturally leads to factions lining up to root against them – and it’s great fun because who doesn’t enjoy bonding with new friends while rooting against a common foe?

“It’s mostly sportsmanship,” Wiebe said. “It’s not even about the big teams or the ones that win a lot. If you’re a poor sport, nobody likes you.”

The jabs are all in good fun. The DC3 Quiz Bowl team has distinguished itself by winning the Colin Matz Sportsmanship trophy that last two years running.

And just like sports, sometimes a team is fortunate enough to enter competition with a ringer who can single-handedly carry a team to victory.

“They have four players, sure, but really it’s a one-man team,” Wiebe complained, just as the other team members indicated she was, definitely, their own ringer.

Quiz Bowl practice consists, unsurprisingly, of answering questions from previous competitions. The process may sound simple, but team members exercise their brains to be able to swing their focus between widely disparate topics. Questions can run the gamut from art and literature to current events, from video games and pop culture to science and mathematics.

Quiz Bowl can be a good barometer of the comprehensiveness of a person’s knowledge. “It really does require a broad base of knowledge,” Curtis said. “Just because you’re getting straight-A’s it doesn’t mean you’ll be good at Quiz Bowl and if you had all C’s it doesn’t mean you’d be bad. They need to have a thorough base of knowledge, and they need to be able to access that knowledge quickly.

The DC3 Quiz Bowl team is coached by Curtis and DC3 math professor Dylan Faullin. The team will next compete in the Snow Bowl at Cowley County on Dec. 1. Curtis said the Snow Bowl is one of the big events of the season, with at least 15 community college teams competing head-to-head.

The national qualifying meet is held every January. Curtis said DC3 has won state at least a few times but it’s been several years since a DC3 team has reached nationals – held this season in Orlando.

Though team members enjoy the competition and the challenge, much of their motivation to participate in Quiz Bowl stems from the comradery and opportunities to represent your school aside from a court or ball field.

“The trivia is really fun,” Wiebe said. “I also enjoy the competitions because we get to know people from other schools with similar interests.”