New Gadget Carves Out a Niche in SMA

Dr. Evil is not around, but over in the Science and Math Annex at Dodge City Community College, professor Sherry Curtis and the STEM club are making stuff with frickin’ laser beams.

Technically, a Glowforge is called a computer numerical controlled laser cutter engraver, but that’s a lot of syllables so most people call it a 3D laser cutter.

“Really super cool,” is what Curtis calls it.

With the Glowforge, students can take practically anything from a pen-and-ink drawing to an elaborate piece created on Illustrator or Photoshop, and “print” it onto materials as varied as wood, cardboard, leather, fabric – even a chocolate bar. The Glowforge uses a laser, precision-focused down to the width of a human hair, to etch material and create permanent, unique markings, or even cut out the intricate, woven knots of a tiny jigsaw puzzle.

Unlike a traditional 3D printer, which builds up a material layer by layer to form a piece, the Glowforge utilizes subtractive manufacturing to essentially carve away material until the final result is achieved. The resulting piece is not a piece of wound plastic filament, but rather beautiful wood, ceramic, leather, or many other materials. 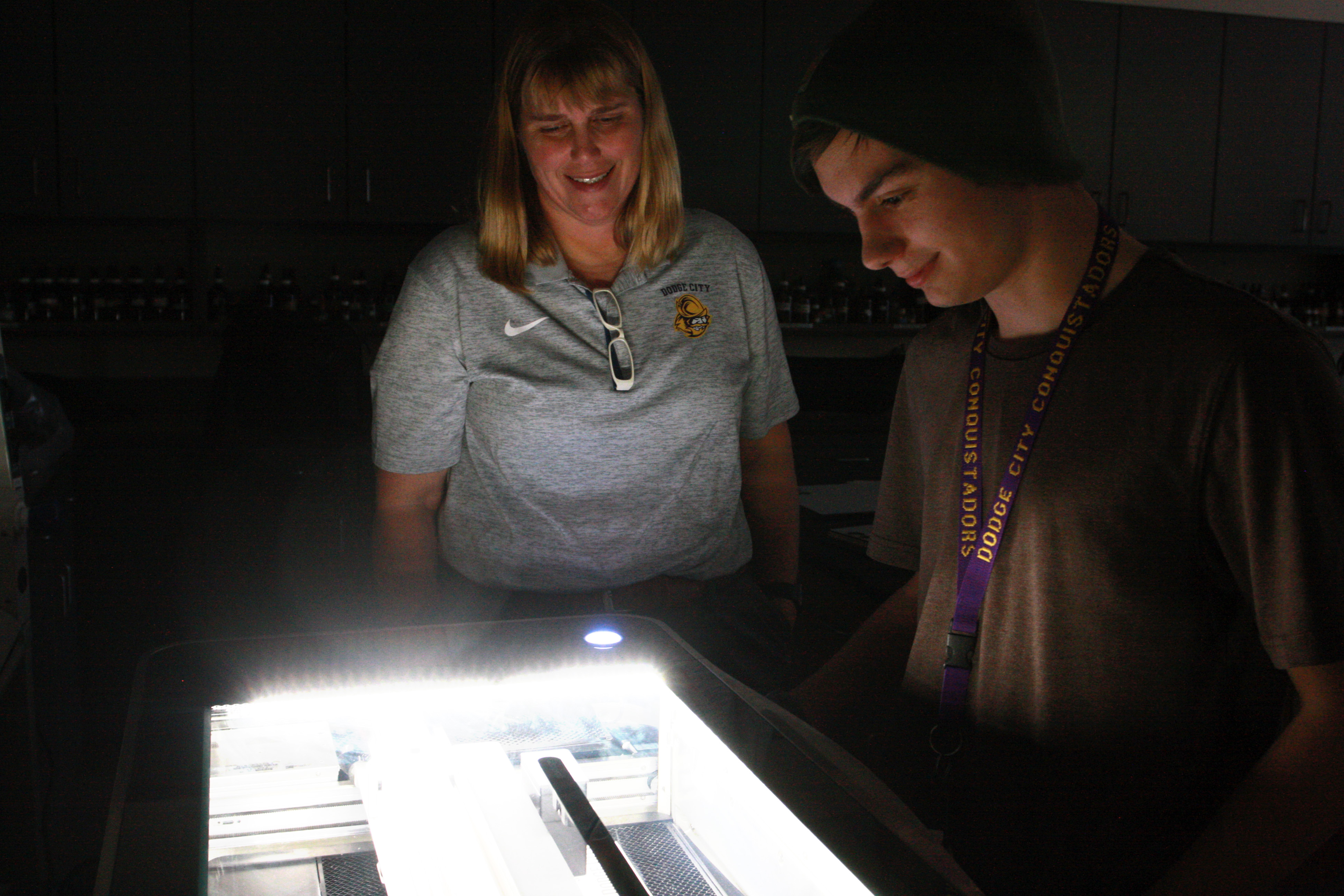 The college actually ordered the Glowforge in December of 2015 while the company was still going through its Kickstarter campaign, so DC3 was able to get its unit for almost half of current retail. The runaway popularity of the machine led to production delays, so the college’s Glowforge wasn’t delivered until near the end of the spring 2018 semester. The device was purchased with funds from a STEM grant by the Louis Stokes Alliance for Minority Participation. The LSAMP grant for DC3 was recently renewed.

Beyond creating fun designs for gifts or home décor, professionals are utilizing Glowforge to advance their fields. Engineers are able to quickly make scale models of various structures or components so they can test feasibility faster and with less expense. Physicians and medical researchers experiment with designs and materials from which they can produce their own versions of medical instruments or fixtures at a fraction of what they would pay manufacturers. Scientists and engineers can economically create multiple versions of a component and test it many times rather than paying for new components over and over.

Curtis said that while the Glowforge is a fun, high-tech toy, it’s also a valuable learning tool. Users can’t just toss in some material and walk away. Students must understand material composition as some materials contain chemicals that produce poisonous gasses from the laser. The material dimensions are also limited, as are the machine’s cutting parameters – which must be calibrated prior to each use according to material type, size, and cutting depth.

“We’re hoping it inspires students to design and create whatever they imagine,” Curtis said. “There are artistic design aspects; there are precision computer aspects that build problem-solving skills. It’s a neat tool with a lot of practical applications.” 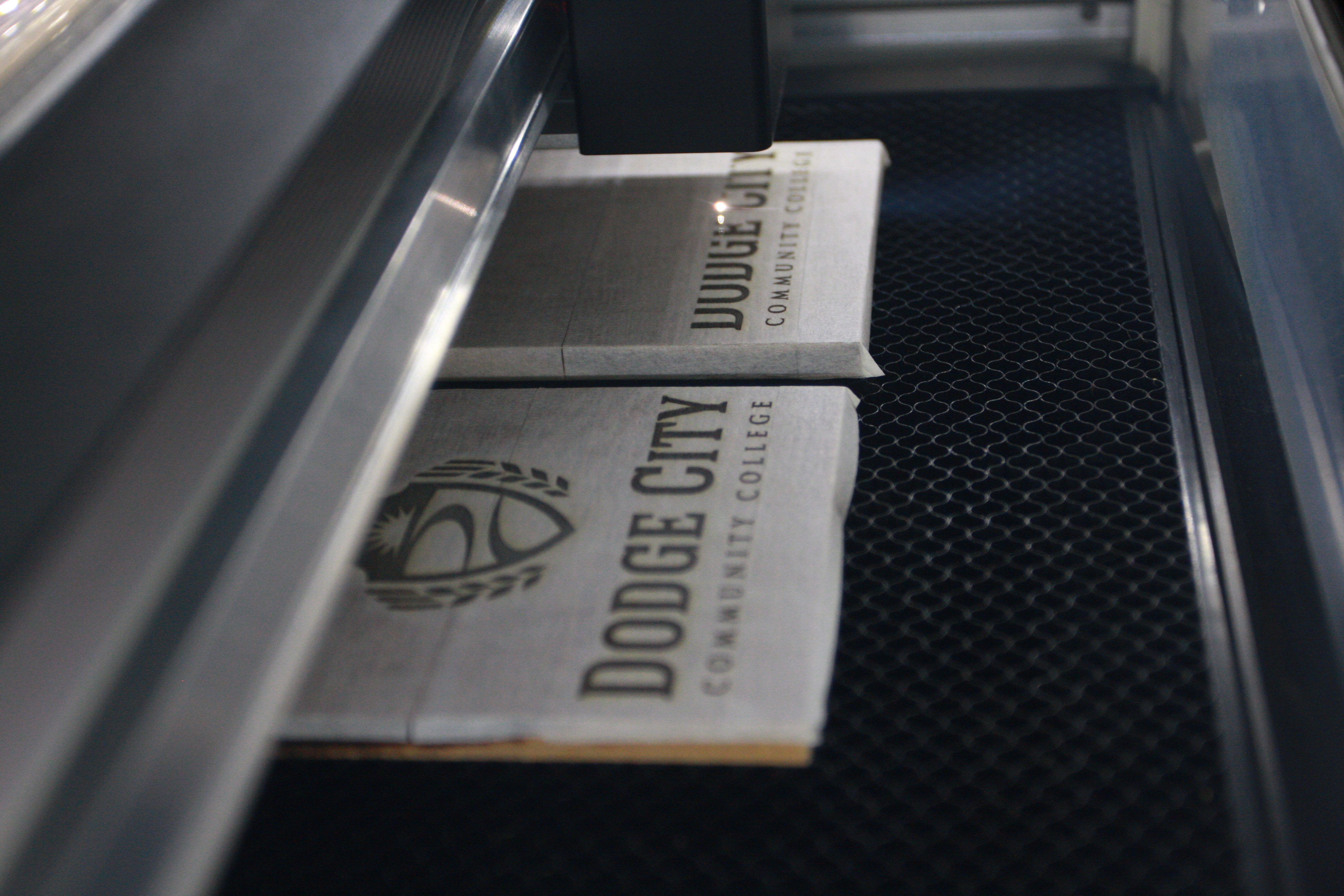 Students can use any of a multitude of software applications to create a design, or the Glowforge can actually scan a design drawn directly onto material. Curtis said she is especially impressed by the detail the laser is able to achieve. She displayed a keychain etched with the DC3 logo, shrunken to almost a quart-inch, with all of the fine lines and detail of full-size versions.

Curtis can envision hundreds of possible projects and holiday gift ideas, and she is actively encouraging DC3 students to utilize the Glowforge. Between Thanksgiving and Christmas, Curtis is planning several Make-and-Take nights for students with gift ideas for people back home, or maybe they just want to personalize something of their own.

“This is a fun tool students can use to make Mom a really neat, personalized present,” Curtis said. “As long as nobody tries to run a business with it, everyone is invited to use the Glowforge. They just need to get in contact with me and we can discuss their ideas.”

Daniel Ulichnie is a senior concurrent enrollment student from Meade High School majoring in biomedical engineering. He enjoys exploring the machine’s capabilities as much as making new pieces.

“It’s really fun, but there are beneficial, educational things about it,” he said. “There’s a lot of material science, and the technology is still kind of new and there are some problems with it, so there are lots of problem-solving opportunities. Sometimes things don’t work and you can experiment to figure out how to make it happen, or how to make it happen better.”