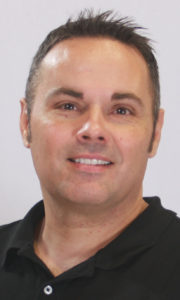 Lance Ziesch grew up close by and attended DC3 in the mid-nineties. His travels have taken him all over the world – through decaying Ukrainian hospitals, Hollywood movie studios, a quasi-American embassy – and ultimately landed him right back here.

The college’s new audio/video technician graduated from Hanston High School in 1993 and then attended DCCC for two years, where he wrote for the Conquistador newspaper and studied agriculture before transferring to K-State, where he earned a bachelor’s in agricultural journalism.

After a short foray as a graphic designer he took an opportunity to take a big step outside the comfort zone.

Ziesch had previously traveled to Romania as part of a volunteer relief effort. The work and the travel whetted his appetite for life abroad.

He worked with an organization to mentor students and conduct mission projects, and was able to arrange an extended assignment in the former Soviet-bloc nation of Ukraine.

Ziesch was quickly enlightened to circumstances of living and working in a nation that was still battling widespread deprivations after years of Communist rule.

At one point Ziesch came down with food poisoning and had to spend ten days in a dilapidated Ukrainian hospital. Friends had to bring him basic toiletries and he had to buy his medication daily – one pill at a time – from the pharmacy in the hospital. As a “rich American” he could afford a private room, complete with a cold water sink plus its own lavatory – down the hall with a padlock on the door for his “exclusive” use.

Ziesch said many Westerners frequented the lone McDonald’s because the American company demanded friendly interaction with customers. Ukrainian customer service consists mostly of ignoring or angrily cursing at customers, according to Ziesch.

“We used to call the McDonald’s the ‘American Embassy’ because you’d run into all the Americans there and actually get treated well. The Ukrainians would get dressed up to go there for dates and special occasions.

“We joked how we wished McDonald’s would train the entire customer service workforce of Ukraine.”

Ziesch worked in Ukraine for two years, and he has traveled to over a dozen foreign countries. He followed his work in Ukraine with nearly three years in Melbourne, Australia.

He said Victoria, the state for which Melbourne is the capital, is basically the “Kansas of Australia. It produces most of the country’s wheat… lots of farms and cattle. With the exception of eucalyptus trees and some kangaroos and wallabies, it looks a lot like Kansas.”

He returned to the US and worked for the High Plains Journal as a layout artist until his cousin came to Hanston to shoot a movie. Ziesch took a month off to work on the film, and ultimately a year later moved to California.

Ziesch continued working as a production designer on several Hollywood film projects over three years before making his way back to Kansas.

“The pace of life was just too hectic,” he said. “I knew there was a better place to live.”

Just prior to coming to DC3, Ziesch was still dabbling in show biz. On 96.3 The Marshal, among his other production director duties, Ziesch hosted two radio shows a week, including a live, three-hour request show.

Jennifer Acosta’s new position as Humanities secretary fits perfectly into the life of the recent transplant from Texas.

Acosta and her husband Felix came to Dodge City only a few months ago after being assigned to the town. Couples are assigned to lead extensive Bible studies in their new areas, and sustain themselves financially at the same time.

Acosta’s position is part time. Felix also works part-time, early mornings on the loading dock at UPS. She said they specifically sought out jobs that leave time for their Bible studies mission.

“We really enjoy doing that, so I’m grateful to find a good job that leaves enough time,” she said.

Acosta grew up in Odessa, Texas but graduated from about 80 miles south in Fort Stockton.

A few years after high school, Acosta signed on for a church mission outside the country. Acosta’s original commitment in the Dominican Republic was for only 10 months, but she said she fell in love with the culture and environment.

For five years she lived in the Dominican Republic performing mission work, returning to the States in 2015.

“It’s so different from the United States,” she said. “Everything here goes super fast. Life there is so laid back. You don’t need a lot of money to live comfortably.”

The work she was doing on her mission also motivated her to stay. She said once her initial ten-month commitment was up, she felt like she was just hitting her stride.

“I was barely getting the ropes,” she said. “My main focus when I go is giving the Bible studies and I felt like I was only starting to help. I met so many good people I wanted to stay.”

Her decision to remain in the Dominican Republic was fortuitous one, as three years into her stay she met her husband.

After returning to the U.S. to be closer to her family and ailing mother, the couple attended a Bible College in Denton, Texas – a goal they had been aiming for since they first met. It was after completion of the Bible College training that they received their assignment here.

Acosta’s also been on short trips with her church to South Africa and Peru. She said the trips were mostly aimed at broadening perspectives.

“You got see different people and circumstances,” she said. “We’re so involved in our little corner of the world that we don’t realize what the rest of the world is going through or how they live. It was definitely an eye opener.”

The couple has been in Dodge City for a few months. Their commitment to lead Bible studies in Dodge City is for one year; after that, they may be asked to stay on or asked to go to a new location – or they could simply decide to do something else.

“I feel like we just got here so I’m just enjoying this year,” she said. “The town has everything we need and we really enjoy doing the Bible studies, so that has us pretty content.”