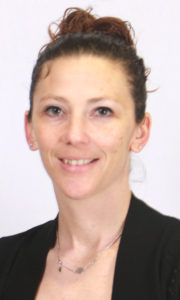 In mid-January, Amber Crook, the college’s new enrollment management assistant, was living in a suburb of Tokyo, preparing to return to Dodge City after a 17-year trek that took her around the world.

Born and raised in Dodge City, Crook left soon after graduating high school. At Emporia State she was a decent student, but she says she had a difficult time remaining focused. “The standard working and going to college just wasn’t working for me,” she said.

After a few years, she decided to enlist in the Air Force. Crook said she found the capacity to truly apply herself in the military. The Air Force trained her to be a cardiopulmonary tech. “It’s like respiratory therapy, cardiology, pulmonary, sleep lab and cath lab all rolled into one.”

Crook was stationed in San Antonio, Texas for the majority of her service from 2006-2012, but she deployed twice to Iraq and Afghanistan.

During her deployments, Crook was part of a Critical Care Air Transport Team. The Air Force CCATTs are essentially flying intensive care units with a three-person team of physician, critical care nurse, and respiratory technician – flying wounded soldiers out of war zones to medical facilities in Germany and beyond.

While stateside, Crook was also tasked with medical transport – this time helping to safely convey neo-natal ICU patients to treatment facilities all over the world.

“I was gone a lot,” she said, “and that makes it very hard to have a family.”

The desire for a family led Crook to leave the Air Force in 2012 after completing her deployment to Afghanistan. Her husband Josh remained on active duty as a medic, so the couple was stationed overseas as they began their family. Their oldest child was born in Germany and their youngest was born in Japan.

The family spent two years stationed in Turkey and Japan for the last four years. Josh recently accepted an assignment to South Korea, where personnel are not permitted to bring their spouses. So Crook brought her two children back to Dodge City, where she’s glad to have a large family support system.

“My family is all here in Dodge, but they had only seen my children two or three times,” Crook said. “Now my kids can put faces to all the names we’ve been talking about. We’re catching up on all the lost time so we’re all loving this.”

After so much time overseas, the culture shock of returning home was far more distinct than in any of foreign destinations.

“I feel like a foreigner back in the States,” she laughed. “Sometimes it seems weird when I overhear people talking and I can actually understand what they’re saying. I caught myself this morning trying to drive on the other side of the road.”

Returning home after such an extended absence can be trying, but Crook said the family is just trying to adjusted to American life again while living in a half-empty house because they haven’t received all their belongings yet.

“We’re just trying to find our new normal,” she said. “I’ve been to several different countries and seen things that people dream about, but now I’m ready to put down some roots.”