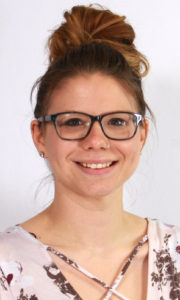 The new Testing Center Coordinator grew up right here in Dodge City – a 2012 graduate of Dodge City High School, where she performed with the color guard during halftime band performances.

She has her sights set on a psychology degree, so in addition to juggling a full-time job and the demands of a five-year-old, she is enrolled through Fort Hays online.

Her daughter will be starting kindergarten at Spearville next year. Responsible for a developing mind of her own, Shae has been essentially preparing for this time for a while.

She first started working with children at First Christian Church where she worked in the childcare center for nearly four years.

At the childcare center, she “found my niche.” Shae worked with infants and toddlers, watching the way they developed and interacted with one another and their environment. She started researching and her fascination quickly grew.

“I just kept digging deeper and now I can’t stop,” she said.

She took a job as the Food and Beverage Supervisor at the Boothill Casino, but after a year she “really missed the kids” so she went to work for USD 443 as a para at Sunnyside.

Working with young people in a learning environment appeals to Shae. She says she found a niche in pediatric occupational therapy.

“I really like to observe the way people learn, especially children,” she said.

She’s a big advocate for nature kindergartens – essentially preschools without classrooms. Children spend their school days almost exclusively outdoors, regardless of the weather. Shae said the whole philosophy is “there is no inappropriate weather, only inappropriate clothing.”

“I find nature kindergartens fascinating,” she said. “They are very successful in Europe. The kids go outside and they learn in the sticks and the dirt.”

She said studies have proven how children that have learned to process the stimuli of a forest – the wind, birds flying overhead, leaves rustling, and dozens of unknown sounds and smells – their attention and capacity to focus is greatly improved.

“We haven’t blocked everything out while they’re trying to learn,” she said, “so they can absorb all the sounds and stimulus. It helps them to focus in those environments that are not sterile and quiet.”

“I really enjoy neuropsych and the way the brain gets activated,” she said. “I’m still tying it all together and finding what I’ll do.”

Shae loves to draw and paint acrylics, and she took a couple art courses at DC3 with art professor Devlin Goldworm while she was in high school.

She stretches her own canvases for her artwork, a skill she learned from Goldworm. She said she prefers to make most of her own décor.

“It’s unique,” she said. “I don’t want lots of things in my house that everyone else has. I like to create things from scratch. From beginning to end, it’s mine, and that’s really satisfying.”

“I like my paintings to just kind of come out however they end up,” she said. “I just like to experiment.”

Her creativity extends to the many tattoos she has. She picked up a second-hand tattoo machine and says she’ll be her own first guinea pig when she gets up the nerve.

“Absolutely! I’ll put myself through that torture before I do anybody else.”