Their project has been so successful that the American Red Cross honored Ford County RSVP with the organization’s Disaster Preparedness and Response Volunteer Award, June 8, in Hays.

Once they saw the response from the community, volunteers at the time decided to embrace the installations as one of their primary causes, and the group has run with that concept ever since.

The goal for the entire Red Cross chapter that year was 1,000 smoke alarms installed in homes across the western two-thirds of the state. The Ford County RSVP program installed over 300 by itself.

The Ford County RSVP program was launched in spring 1974 as an avenue for retired individuals to serve community needs and fellow seniors. Dodge City Community College has been the sponsoring agency for the majority of the organization’s existence.

Since beginning of the project the group has installed more than 500 smoke alarms in 216 homes.

“I just keep them equipped and they keep putting them in,” said Deb Tucker, Disaster Program Manager for the Red Cross – who nominated the organization. “It’s really been a great partnership. The people of Ford County should be proud of what they are doing.”

“We could not do this without our great volunteers,” said Lise O’Neal, interim RSVP director. “It’s also a great collaboration with Dodge City.” O’Neal said Dodge City officials help identify need and then point RSVP volunteers in the right direction. 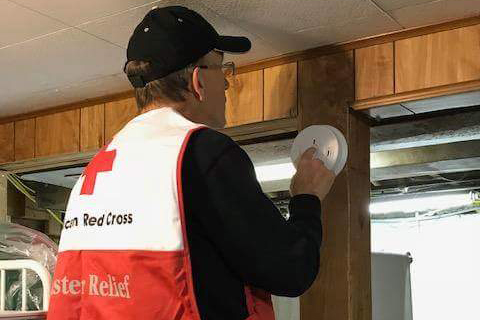 Ford County’s volunteers not only install the detectors but help residents develop fire escape plans and advise on preparation for other emergency situations.

O’Neal said her volunteers often encounter residents who don’t even know what a smoke alarm is, and may not understand the importance of preparedness. She said the educational component is as important as the alarms.

“We talked with one little girl, about seven years old,” O’Neal said. “When we asked her what she would do if there were a fire, she said that she would go hide in the closet. So it’s very important that we educate everyone in addition to the installations.”

Tucker said that the group’s dedication has been evident since they took on the smoke alarm project. She said she started working with the group on Martin Luther King Jr. Day in 2018, with minus-20 wind chills.

“We still had five RSVP volunteers and five Red Cross workers,” Tucker said. “We installed over 80 alarms that day alone.”

RSVP partners with the Red Cross – which furnishes the smoke alarms and other materials, while RSVP volunteers locate appropriate dwellings and handle the installations. The group also has special alarms for the hearing-impaired, with more visual cues to an emergency. The detectors are specially made with 10-year lithium batteries so they don’t need changed twice a year. To register for a smoke alarm installation in your home contact RSVP at (620) 227-7077.

RSVP matches people over age 55 with much-needed community projects or activities that suit the individual’s interests and skill set. Volunteers from the organization help provide local schools with reading tutors, serve as child advocates in the court system, deliver hot meals to seniors who may be homebound, provide transportation assistance, assist in grocery shopping, and assist in community recycling and beautification efforts.