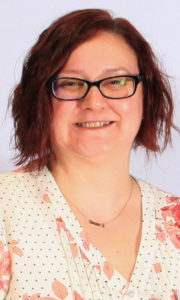 Amber Fuller, the college’s new enrollment management assistant, was involved in a lot of theater productions in high school in Texas, and almost unintentionally, theater has given her a couple of fortuitous breaks in Kansas.

She was born in El Paso, Texas where she graduated from JM Hanks High School.

“I was definitely a theater geek in high school,” she said. “That was my main group of friends.”

She moved to California after being accepted to UC Northridge. She said the out-of-state tuition in California quickly discouraged her from entering college right away.

“It was more than four time in-state tuition,” she said. “I decided to go to work and move in with my uncle until I could claim residency, so I lived with him and worked. Mostly I toodled around,” she laughed.

In 2008 she came to Kansas where her parents had moved, and attended Garden City Community College, where she earned her associate of science.

After graduating from Garden City, Amber’s sister needed some help so she lived for a year on her sister’s horse ranch in Colorado.

She and her husband just recently moved to Dodge City from Cimarron, where they had lived while caring for an aging grandmother.

She met her husband Ben, a network administrator at National Beef, while running the Haunted Hotel at the Depot Theater. Ben was volunteering as well, using his building skills for sets and lighting and sound. Theater.

“I think a friend roped him into that job,” she said.

Amber did some community theater briefly after high school but didn’t pursue it further until an instructor at GCCC suggested she audition for a production. Her theater experience led to a scholarship offer.

“I was going into education, so I thought maybe I could teach theater,” she said, but eventually she became understandably reticent to teach willful teenagers.

“I’m glad to be in an environment where the students really want to be here,” she said.

She began volunteering at the Depot simply to be involved and was soon part of the productions. She has performed in Christmas Cactus, Proof, and most recently as a domineering ex-wife in Education of Angels. She also volunteers in the box office and other duties.

Amber said she simply has a love for expression – encouraging her daughter’s own art and music, as well as athletic pursuits.

“I think any form of expression is just awesome,” she said. “You just never know what’s going to happen in the theater. I love all the arts; theater just happens to be the only one I’m any good at.”

Dr. Gregory Roberts, the new TRiO director, has been working in Student Support Services for a long time. He’s been advising and mentoring, almost out of necessity, for a long time, too. It’s basically a role he’s played since he was young.

Roberts was the oldest child in a family of eight, living between the Watts and Compton neighborhoods of south Los Angeles County in August of 1965, and was a first-hand witness to the six deadly days of Watts riots: 34 deaths, more than 1,000 serious injuries, and over $40 million in property damage as buildings were burned and businesses looted – quite an experience for a twelve-year-old.

“Mom moved us from there and we stayed away until it was all over,” he said. His mom took the family temporarily to Shreveport, Louisiana, but returned to Watts soon after the smoke cleared.

The riots may have ended but Roberts said the area was as harsh as its reputation made it out to be.

“It was rough,” he said. “As the oldest in my family, I focused on leading my siblings away from that culture.

I was fortunate enough to have a large group of siblings that we probably looked like a gang. It might have helped keep a lot of people away from us,” he laughed.

He graduated from Compton High School. He said as the oldest the other kids looked to his for guidance, and he served as his mother’s right-hand-man.

“I’ve always had the role of supporting and encouraging others,” he said.

It was natural then, for him, to study sociology and guidance counseling in college in order to fine tune his skills. His undergraduate degree is in sociology He earned his doctorate in Sustainability Education from Prescott College.

While working in TRiO at the University of Utah, he also worked with youth in the juvenile correction system. “I wanted to keep my hands in the community.”

He has worked in TRiO leadership at three different institutions. Prior to his Student Support Services roles, Roberts spent three years evaluating the physical and intellectual capacity of injured soldiers returning from overseas service.

Roberts said much of his free time is spent staying abreast of his field. He said along with the advising and guidance counseling, professional development is important to him. He has been very active in state and regional TRiO committees.

Roberts was raised by a single mother and said the experience of growing up on social services motivates him to help underrepresented student populations. He feels that education is the great equalizer to raise oneself out of poverty.

“My passion is to serve low-income students,” he said. “This position allows me to take a personal interest in students so they feel that sense of belonging and make it all the way to graduation.”