Although it has been 50 years since the Conquistadors left the building, the two-story red-brick school at 1000 N. Second Ave. is still referred to as the “old college” by many in the community. And now that the building is undergoing demolition, Dodge City Community College (DC3) bids the venerable old place one last goodbye.

In its 106 years, the “old college” building has had several uses. Originally built in 1914 by Dodge City Schools as a high school, it became a junior high facility when the new high school (now Comanche Middle School) was completed in 1924. And when Dodge City Middle School was built in 1956, the building was once again open for occupancy. And the following year, DC3 moved in— after outgrowing its space on the third floor of Dodge City High School.

So, in 1957, the building became the proud home of the Conquistadors. However, like its prior location, DC3 would soon outgrew this building as well. And with no room on site to enlarge the facility, the college’s only option for expansion was to purchase the houses across the street, which it utilized for various offices, programs, and departments.

By the mid-1960s, the DC3 campus buildings were showing their age, and the college was again out of space. So, the college began to look for property on which to build a new campus. And in 1967, they acquired 143 acres of farmland on the western edge of the city. A year later, dirt work and construction began.

After DC3 moved to its new campus in March 1970, the “old college” building was vacant once again, although not for long. In October 1970, USD 443 moved its administrative offices there, and the Cultural Heritage and Fine Arts Center, which later became the Kansas Heritage Center, moved into the old college library area.

However, now that USD 443 has completed and occupied its new district office, which is connected to the Dodge City Civic Center, and the Kansas Heritage Center has relocated across the street to the basement of the Dodge City Public Library, the “old college” building is undergoing a speedy demolition. 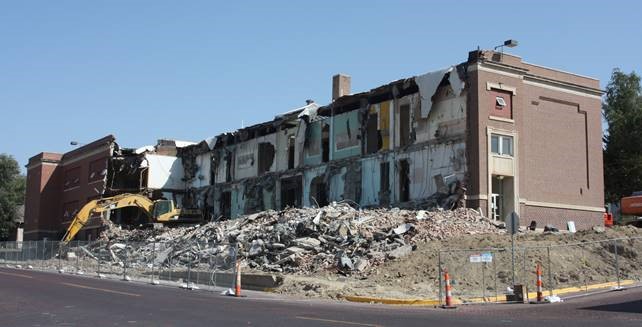 The first phase of the building’s dismantlement began in July 2020, when furniture and fixtures were offered for sale on Purple Wave Auction. The next phase, which began in late August, started with asbestos removal. And then the real demolition work began in September, as workers began knocking out windows and removing wood from the interior.

The building’s 1914 cornerstone was removed on Oct. 1, by workers from USD 443 and Hutton Construction, which is the company in charge of the demolition. A small crowd—made up of representatives from USD 443, DC3 and the Ford County Historical Society—was on hand to watch the process.

The cornerstone, along with the matching Board of Education block located near the front doors, will join other salvaged items already given to the Ford County Historical Society. These items include some of the building’s interior woodwork and doors, the decorative light fixtures from its hallways, the west entrance’s iconic triangle-grid-pattern windows, and the second floor stained-glass skylight.

As of early October 2020, the “old college” building is undergoing its final demolition. And by the end of the year, all that will remain are memories—and a vacant lot.