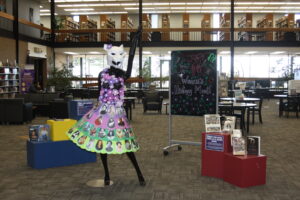 March is Women’s History Month, and the Dodge City Community College (DC3) Library is hosting a special display that showcases women pioneers and leaders from various fields and industries.

The display, which is titled “Together We Roar,” features a mannequin with a white lioness head and a multicolored flower-petal dress. And it also includes a selection of related books.

“I saw a similar concept online and wanted to execute it with my own touch,” Rose Duong, DC3 Part-Time Library Assistant, said. “The hardest part was figuring out where to get a mannequin base, but the DC3 Bookstore was kind enough to lend us one of their lovely models.”

Duong said she considered several concepts for the mannequin’s dress, but she finally decided on a design that blends the women’s photos with the flower petals of the dress.

“While I was doing research on Women’s History Month, I found out that the colors traditionally associated with International Women’s Day are purple, green, and interchangeably white and yellow. The purple symbolizes justice and dignity, while the green symbolizes hope,” she said. “I chose to do a flower theme in order to give the impression that the lioness is blooming out of all the amazing women who came before her.”

Commenting on why she chose to add a lioness head to the display, Duong said she has always found mannequin heads creepy in general, no matter how they are presented. So, she decided to cover the head with something less off-putting—and something more appealing—that better aligns with the theme of the display.

“I settled on a template for a lioness mask in the end, because I saw a connection in the way that the media portrays the male lion as the king of the pride,” she said. “When really, his job is to guard the territory and the cubs while the lionesses do the majority of the hunting.”

Lion prides are actually matriarchal, instead of patriarchal, she said. The oldest females are in charge of several generations of younger females.

“I wanted to draw a parallel between how the role of women and their contributions throughout history have been similarly overlooked in favor of their male counterparts,” Duong said.

To further emphasize the lioness aspect of the display—and also to acknowledge the wide array of women’s contributions throughout the ages—an attached sign reads, “There’s no such thing as a silent roar.”

“The sign means that if you make the effort to put something [positive] out into the world—no matter how grand or how small it might be—you make an impact, even if you might not consider yourself to be someone important,” Duong said.