Out of the five STEM projects, two focused on water analysis. The first, which was conducted by student Leslie Rodela, identified different types of bacteria collected from water samples of DC3’s Lake Charles. The second, which was carried out by students Luis Morales and Jesus Becerra, reviewed water samples in the Dodge City area. In their study, Morales and Becerra, looked at pH, total hardness, total alkalinity, free chlorine, total chlorine, copper, iron, nitrite, and nitrogen levels.

A third project was a “Mars Robot Challenge,” in which students, Jesus Becerra and Luis Morales, built a robot using a VEX robotics kit. As part of their demonstration, a course was constructed where the operator used the robot to pick up a tennis ball and place it in a bucket—with a time delay that simulates how NASA communicates with rovers on Mars.

“Our simulation was a 5- to 10-second delay, but the actual time delay from Earth to Mars, on average, is around 20 minutes according to NASA,” Dylan Faullin, DC3 Associate Professor of Math, said.

And the remaining two projects included a survey developed by student Anahi Rodriguez regarding behavior-related issues that might affect academic work performance due to playing video games, and a scale model of the DC3 campus built by student Medel Orozco. 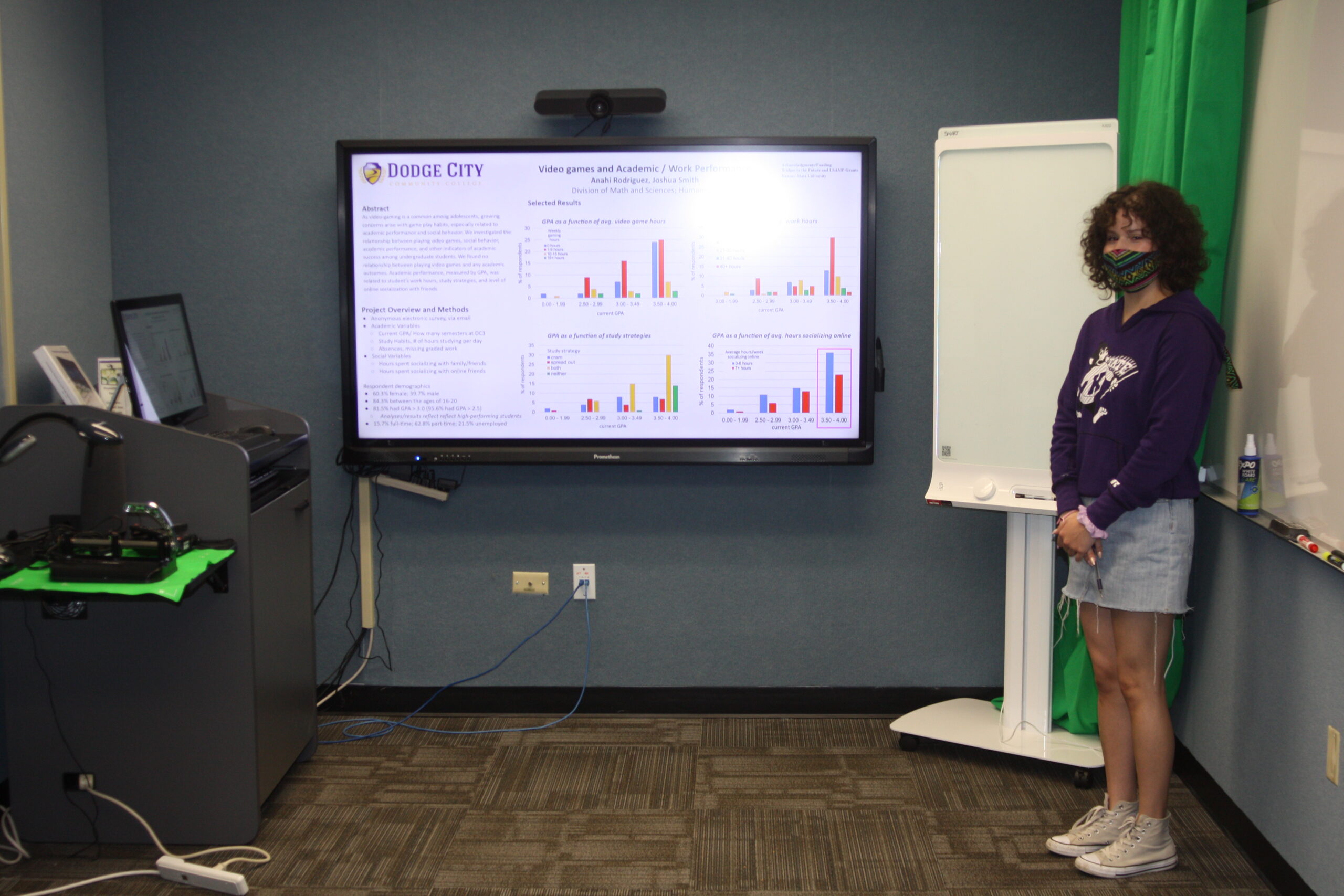 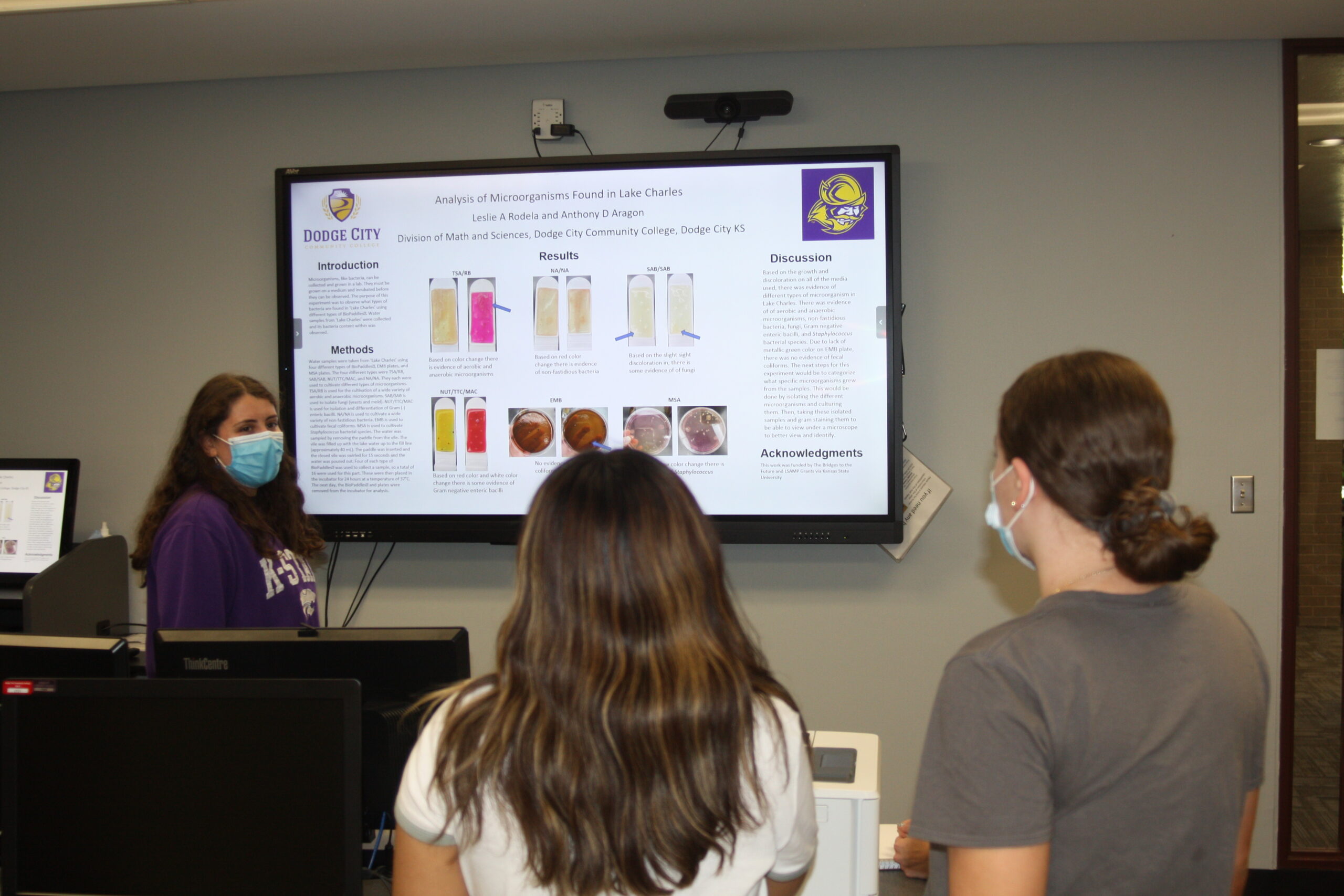 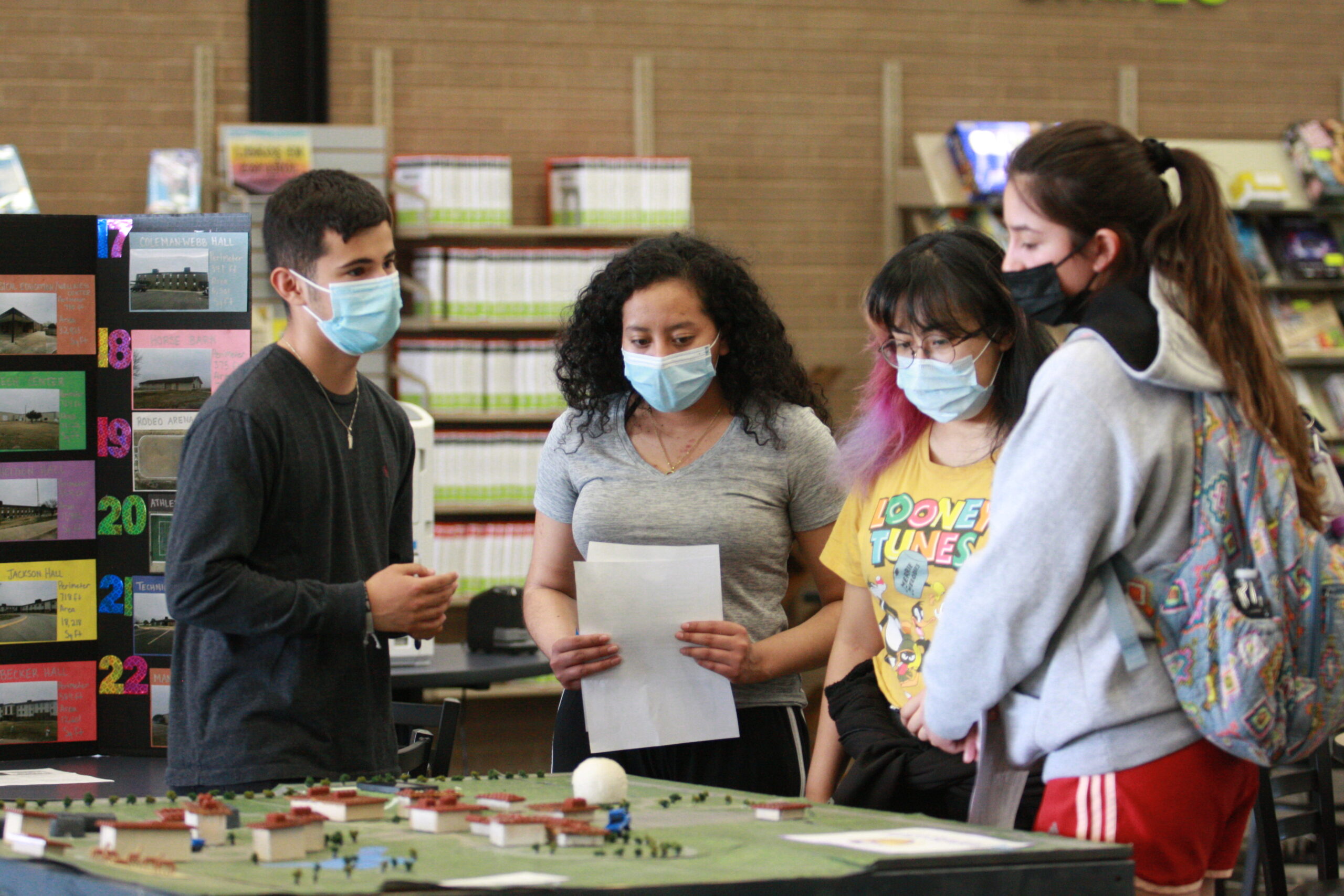 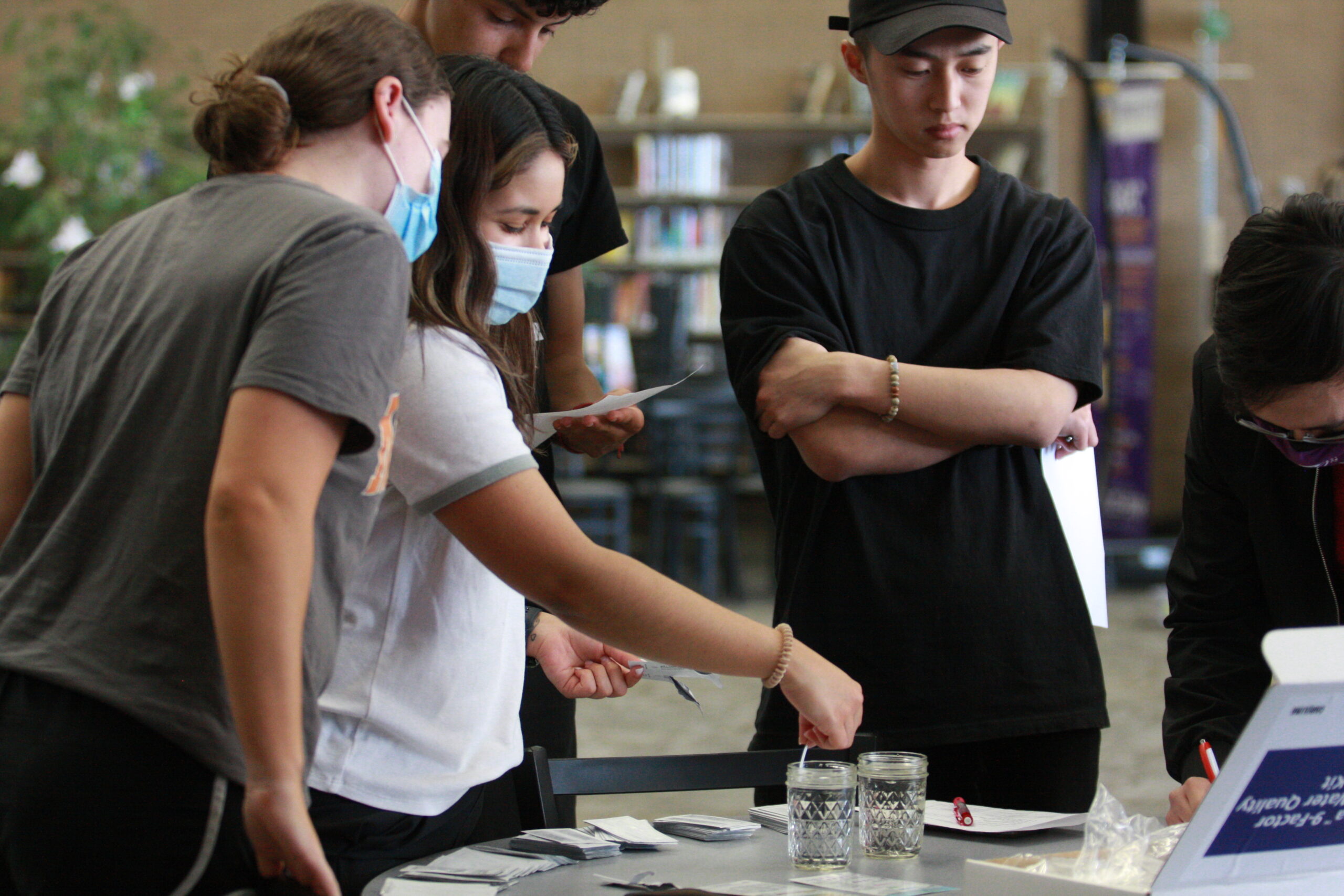 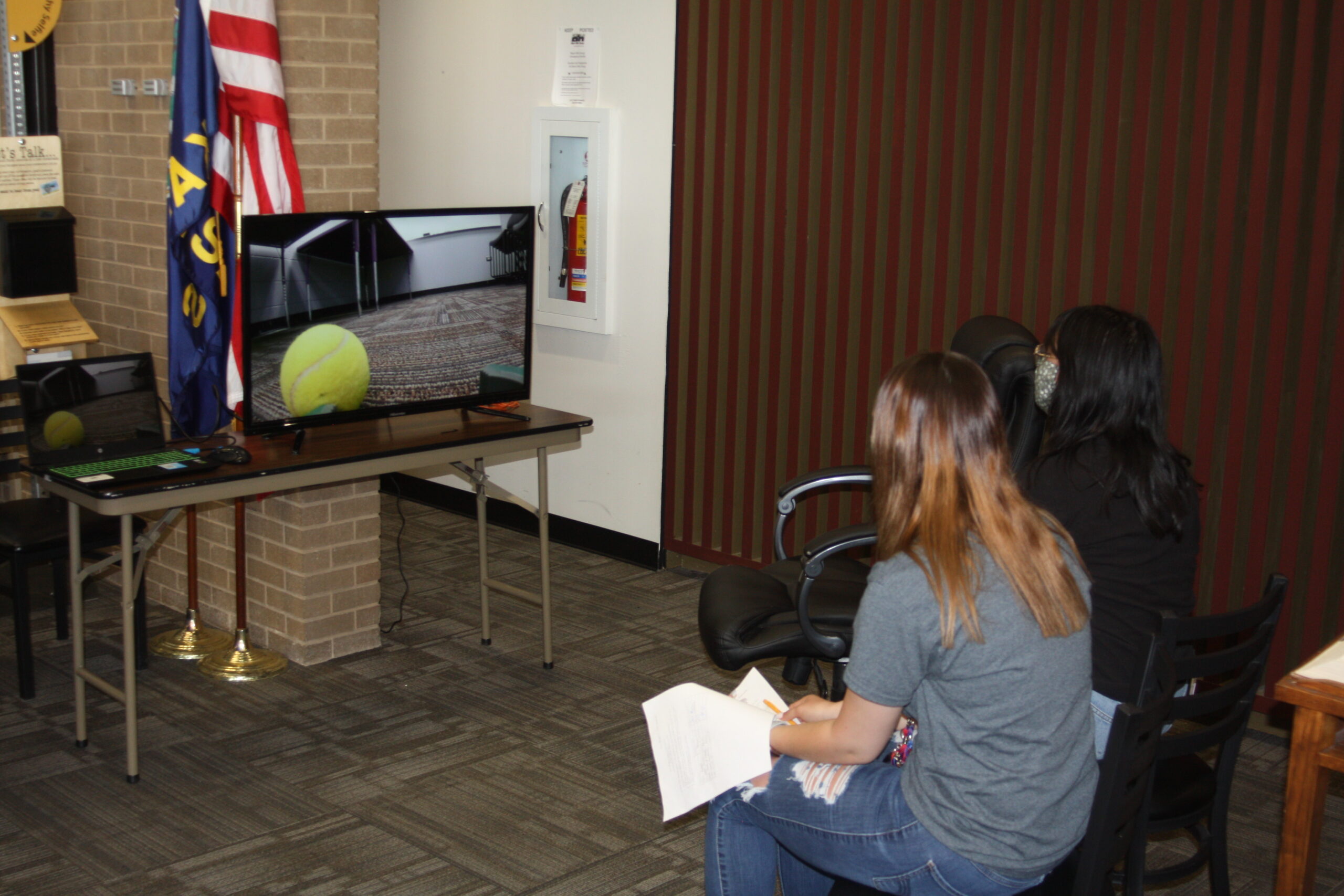 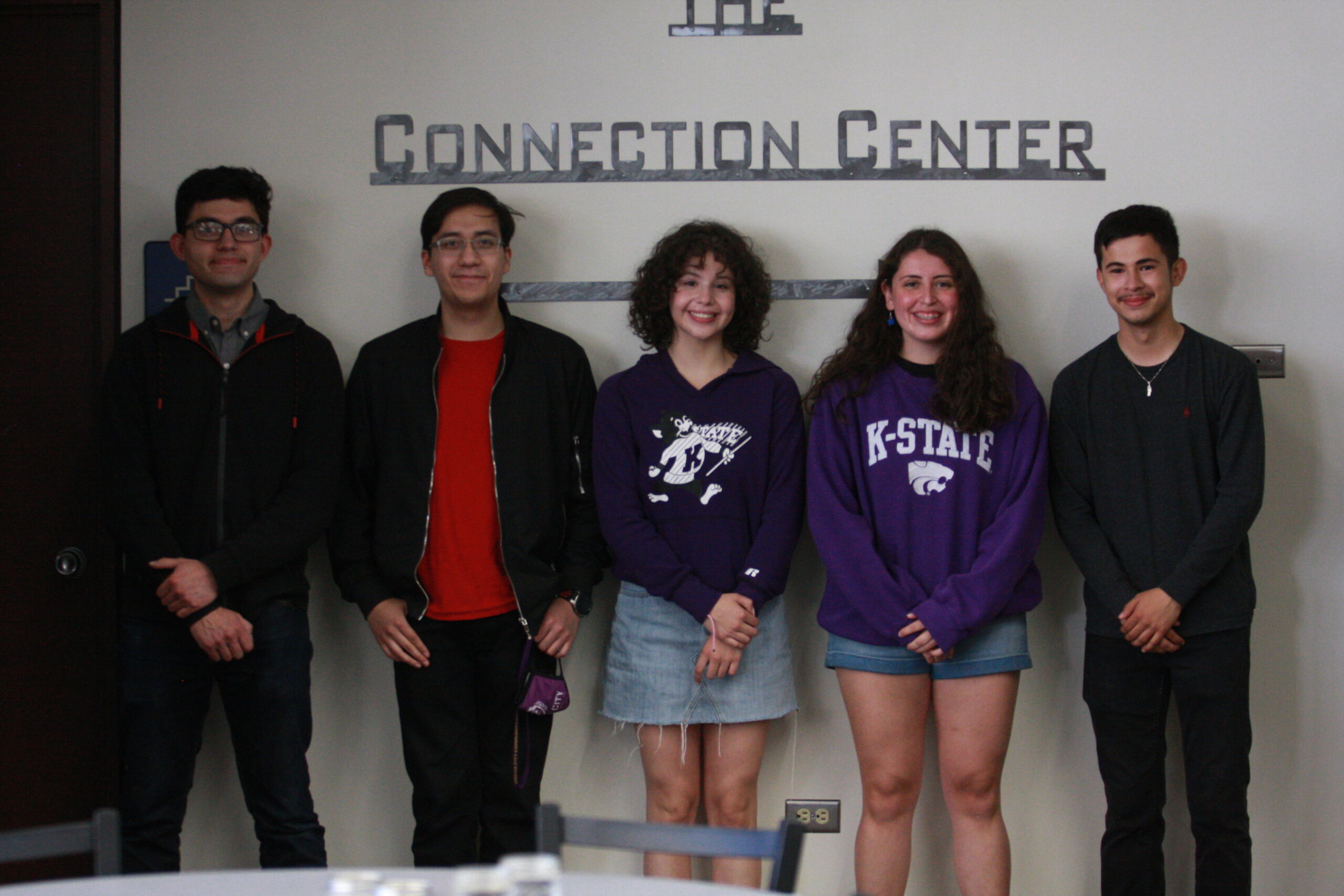 Dr. Anthony Aragon, DC3 Associate Professor of Biology, said the idea for the event came about because DC3 faculty wanted to give their STEM students a chance to gain some practice presenting their research in front of the public.

“We came up with this because it gives them some experience,” he said. “They were all a little nervous about this, but as you can see they are pretty comfortable. When they go further into graduate schools and stuff, then they will have to do the formal talks in front of audiences. And those are a lot more intense than this.”

Aragon said that all five STEM students also have been accepted at Kansas State University next fall through Bridges to the Future, which is a grant-funded program funded by the National Institutes of Health to help increase the number of historically underrepresented students who attain baccalaureate degrees in biomedical and behavioral sciences.

“Bridges is for us to recruit students here who are interested in going into science, and get them working, thinking on science projects,” he said. “And then, we basically ‘bridge’ them over to K-State.”

As part of the program, the students will have an eight-week research internship this summer, which is in collaboration with faculty at K-State, he said. And then, after they transfer to K-State in the fall, they will be working 10 hours a week in a research lab.

“So, they will continue doing research at K-State,” he said. “And they will also get a $2,000 stipend for doing that research in the lab.”

In addition, the students also will be getting their tuition covered by K-State, he said.

“It really does open up opportunities for them to further their education by doing stuff like this,” Aragon said. “So, what we are doing here [today] is something that they will do two or three times a year at K-State. They are going to present their research at K-State, they will present it at regional and national meetings, and maybe some of them will be lucky enough to go to an international meeting to present their research there.”