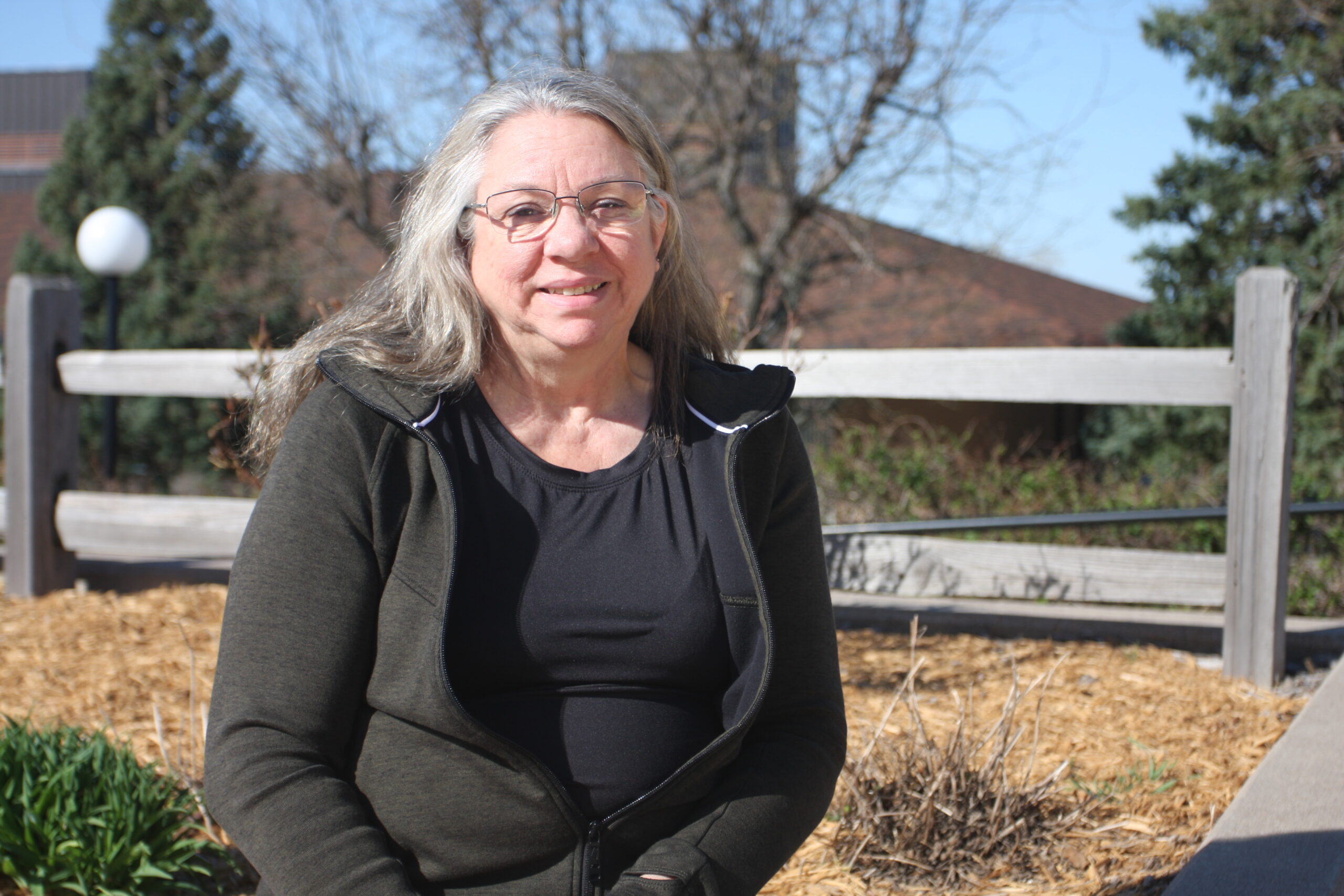 After nearly 30 years, Ramona Shean, the Dodge City Community College (DC3) Assistant Director of Facilities & Operations is stepping down. Shean, who started at DC3 on Nov. 1, 1991, will officially retire May 1, 2021.

Hired originally as a secretary in the Maintenance Department, Shean has served in several capacities during her tenure at DC3.

“I was supposed to start on Nov. 1, 1991,” Shean said. “I was driving from Cimarron at that time, and that day, there was a snowstorm. I hadn’t heard any radio announcements or anything, but I actually made it to Dodge City. So, I pulled in the front of campus, and I heard on the radio that the campus was closed. I almost got stuck getting out. That was my first day.”

Of course back in 1991, the DC3 offices were still doing things by hand, she said. It was still very much the era of the typewriter, as the use of personal computers (PCs) was just beginning in the workplace.

“The first PCs on campus were Apple Macintoshes,” she said.

With next to no computers on campus, that meant there was also no email—that came a year or so later, she said. In fact at that time, there were only two fax machines on campus. One was in the Administration building, and the other was in the Learning Resource Center.

“When I started, the maintenance office daily work was still done by hand or by typewriter,” she said. “The room scheduling was kept in a notebook and then typed on triplicate forms that were distributed for set up and foodservice.”

As the new technology came out, the maintenance staff had to learn it, Shean said.

“They did on-campus training, so everything became computerized,” she said.

Another change over the past 30 years is the growth of the college’s fleet. When she started, the ‘fleet’ was one big bus, four or five 15-passenger vans, and six cars.

“But, look at us now,” she said. “We have three motor coaches, four Turtle Top mini-buses, one passenger van and seven cars.”

As time went on, Shean was promoted to office manager, because she started overseeing some of the maintenance night crew.

“As I supervised more people, I got to progress up,” she said.

A few years later, she became the interim maintenance director, and then finally the assistant director.

“Many people have come and gone,” she said. “And there have been many new improvements to the campus. I have enjoyed being a part of all of these.”

Shean said that through the years, she has often been called the ‘go-to girl’ on campus. And she hopes that she has been worthy of that nickname.

“To me, maintenance is taking care of things,” she said. “And of course, being a mom, you always take care of your family. The Dodge City Community College is another family to me, and hopefully I have made it better.”

In turn, Shean said she thinks the college has made her better as well.

“I have learned additional skills that made my job easier, and I also have learned how to work with many different types of people,” she said.

After Shean graduated from Sublette High School and began taking classes at Southwest Kansas Technical School in Liberal, she said she had a goal of working and growing with a business for 10 years. 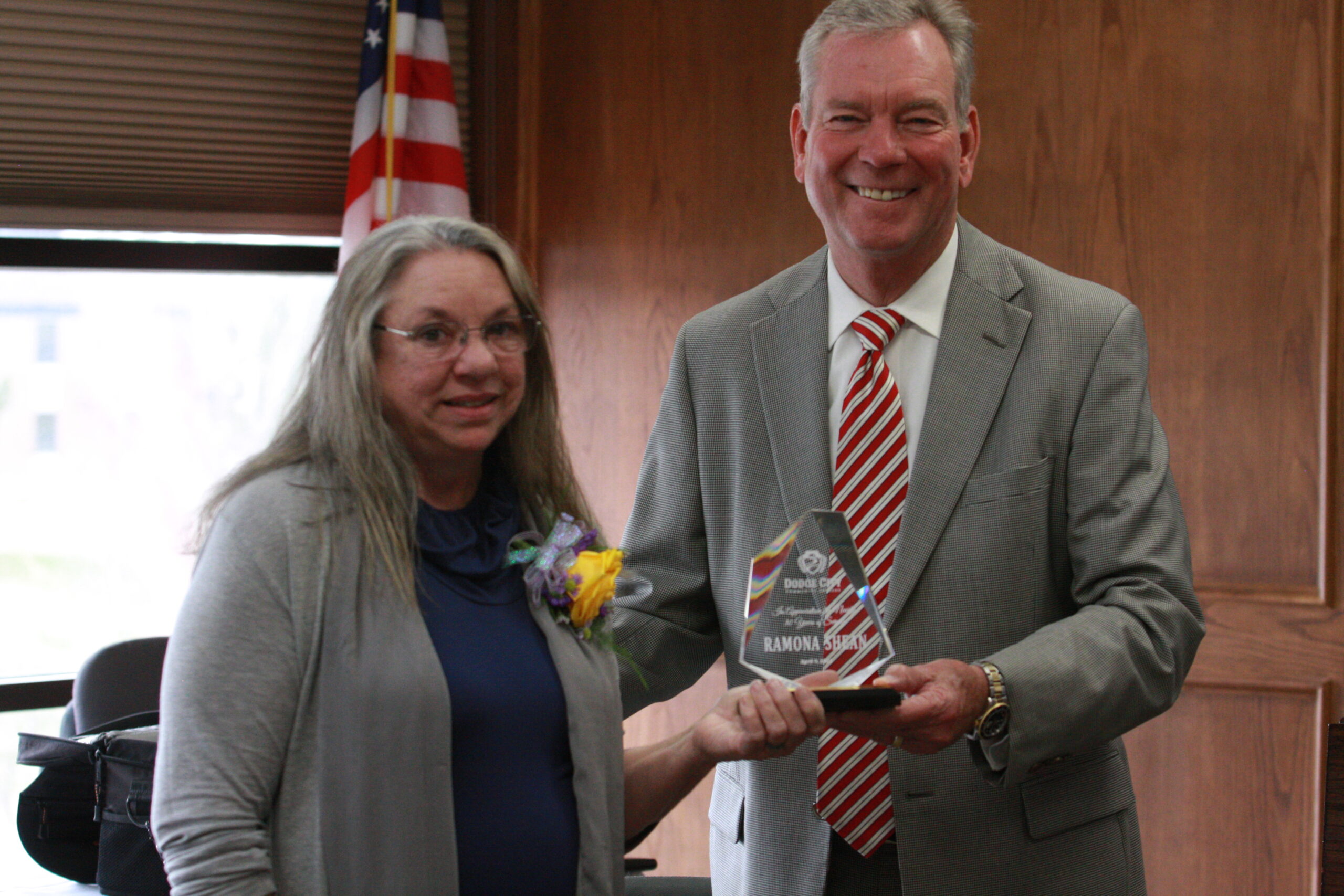 DC3 President, Dr. Harold Nolte, presents an award to Ramona Shean for her nearly 30 years of service at a college-wide retirement reception on Friday, April 9. [Photo by Justin Wilson]

As she prepares to say goodbye to DC3, Shean said she thinks the college is in a good place.

“I mean, you have your down times and your hard times, but for the most part, all the changes that we have had—and how we have grown—it’s all for the better,” she said. “It’s not always easy, but the college is doing well, and I think it is going to continue to grow. I see nothing but growth for DC3.”

DC3 Maintenance/Grounds Supervisor, Jared Stevens, has been tapped to fill her position, and Shean said she thinks he will do a great job.

“I hope we keep maintaining and continue to work on our deferred maintenance,” she said. “We need to really work on that. The campus was built back in 1970, so we have got to keep up with it in order to continue to grow and to bring new students on campus.”

Shean said she will definitely miss the people she works with at the college, especially her Maintenance Department family. And she also will miss the daily challenges that come with her job.

However, no matter how much she may miss DC3, Shean said it is definitely time for the next chapter of her life.

“My full-time title now is just Mimi,” she said. “So, now I get to go spoil my eight grandkids.”

And of course, she said she will still keep up with her college family, as 30 years of watching over the campus will be a hard thing to quit cold turkey.

“I’ll probably still watch the weather, because I’ve always done that,” she said. “And I’ll think about maintenance every time it snows, but I’ll enjoy the snow in front of my fireplace now. I might send them a picture drinking my cocoa or coffee, and say, ‘Sorry!’ ”

Although Shean’s retirement will not be official until May, her last day of work was Friday, April 9. That afternoon from 3-4 p.m., the college honored her with a come-and-go reception in the Student Union Board Room.