In addition to a small crowd, members of the Barnes family also were on hand for the ceremony, including the son of the late college president, Dr. Roger Barnes, of San Antonio, Texas. 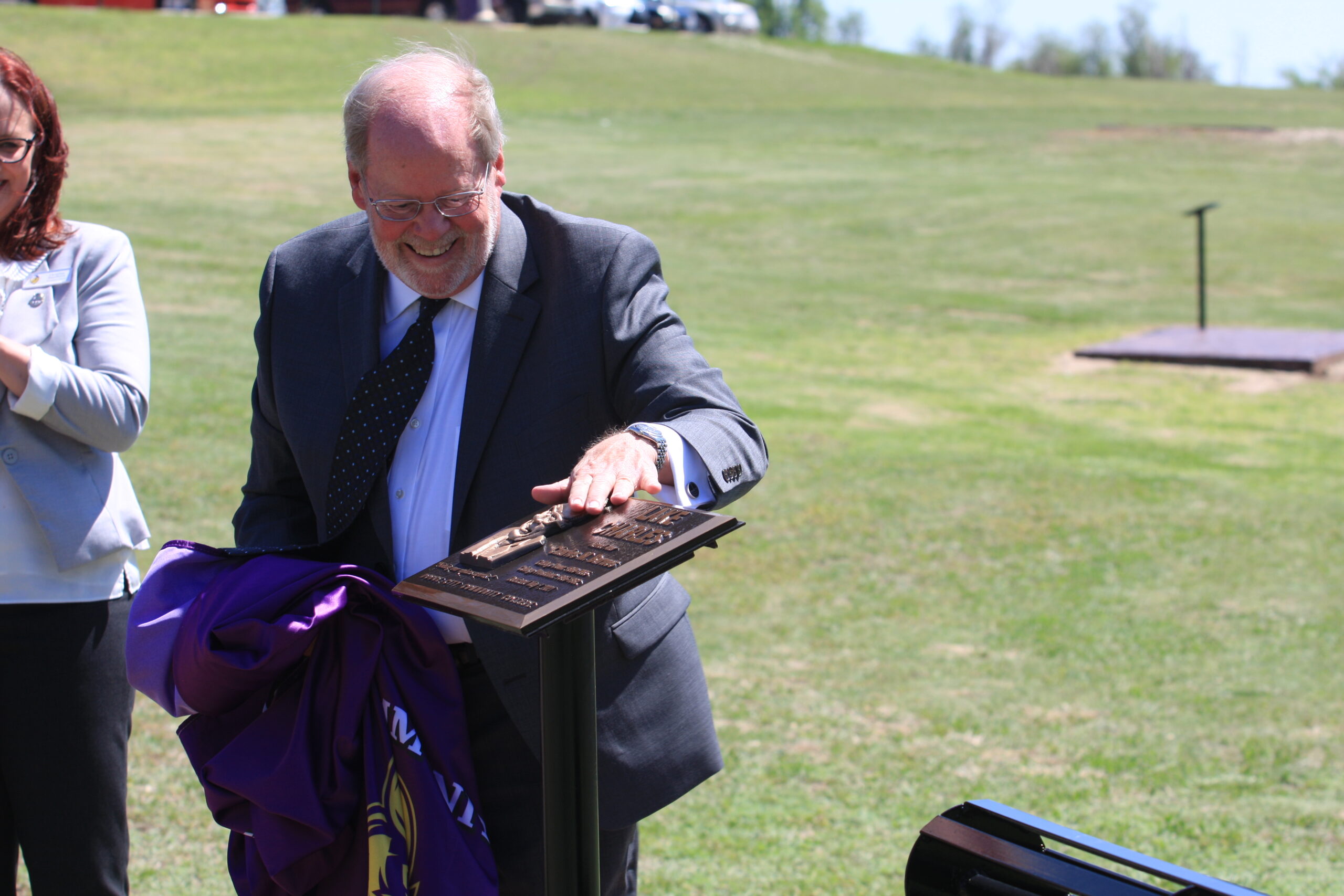 Because Dr. Barnes—who was selected as DC3’s 2021 Distinguished Alumnus—was already scheduled to be in Dodge City for the weekend’s graduation activities, the college decided to surprise him, and his family, with the event.

Also representing the Barnes family were his wife, Dr. Karin Barnes, and his daughter and son-in-law, Ingrid Barnes and Juan Renteria, of Dallas, Texas.

Dr. Barnes, in his remarks after being asked to unveil the plaque honoring his father, said the Barnes family was extremely grateful—and genuinely surprised—by the lake’s official dedication. And he said he thought his father also would be proud of the gesture.

“He would be very, very proud of this moment,” Dr. Barnes said. “I think it’s altogether appropriate that it is not a dormitory. It’s not a laboratory. But it’s a lake that was named after my dad. He was an avid trout fisherman.”

The 10-by-20-inch bronze dedication plaque, which features a bas-relief image of Charles Barnes, is mounted on a black metal pedestal that is part of a new 6-by-10-foot seating area on the northeast corner of the lake. The area includes a stamped red-brick concrete pad, which was courtesy of Brak-Hard Concrete Construction Company LLC, and a black metal bench fabricated by the DC3 Welding Department.

Following the surprise lake dedication—which the college successfully managed to keep from the Barnes family until a few minutes before it began—the event concluded with a reception in the DC3 Library.

The lake that eventually would be known as Lake Charles was added to the DC3 campus in 1973, which was three years after the college had moved from its previous location at 1000 N. Second Ave. to 2501 N. 14th Ave.

And although there are theories as to why it was dubbed Lake Charles, there isn’t a lot of archival evidence that documents the exact reason behind the name. However, campus legend states that DC3 students at the time, for fun, began calling it that, after their college president. 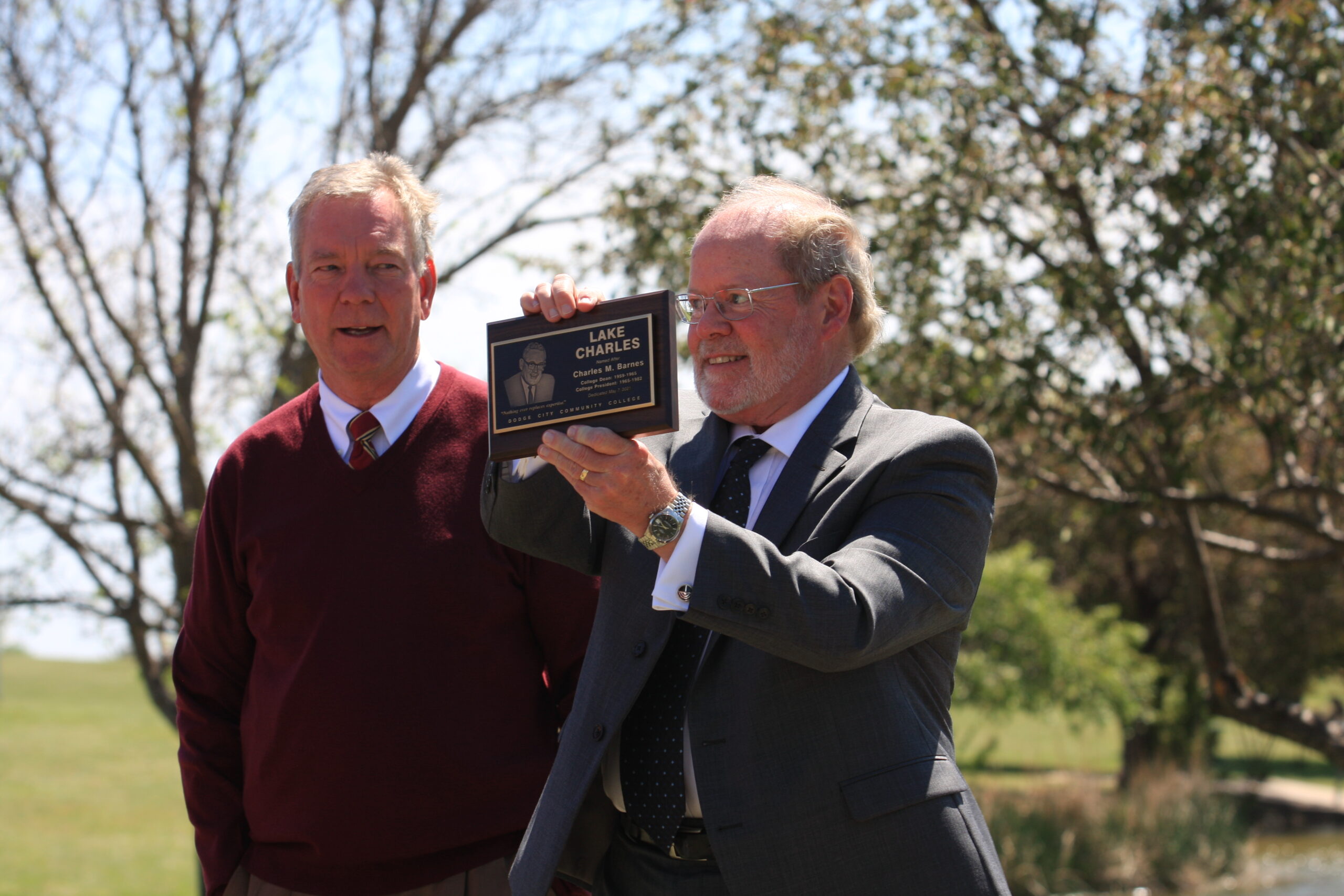 Dr. Harold Nolte, DC3 President (left), presents Dr. Roger Barnes with a replica of the bronze plaque unveiled
at the Lake Charles dedication on May 7. [Photo by Justin Wilson]

Regarding the new lake, the May 16, 1973, Conquistador newspaper ran a story titled, “‘Name the Pond’ Contest,” which suggested that the school bring the lake-naming matter to a campus vote. Included with the article were a few tongue-in-cheek suggestions: Trauer’s Trench, Harshberger’s Haven, Shelden’s Swamp, Ridge’s Reservoir, Mai’s Marsh, Barnes’ Bog and Kliewer’s Puddle.

And the article closed with the following two sentences: “All students and faculty members are urged to enter the title which they deem most appropriate in the blank provided and to return their entry immediately to the Publications Center in the Student Union. Every student voice will be heard—and every member of the faculty and administration should feel it their duty to voice an opinion—if only to shift the vote away from their own name.”

By Fall 1973, the lake-naming contest was in its final stages. And the Oct. 24, 1973, Conquistador newspaper featured two articles about the new lake, and it also included a ballot with six final name choices: Lake Water, Lake Charles, Lake Sunny Dip, Lake Golfers Gold Mine, Lake Conquistador and Conq Creek.

Above the ballot, the article included these words: “This is it! This is your big chance to vote for the lake title of your choice. We have several selections to choose from, all submitted by the creative members of our beloved school. Place an X beside the title which you think is the most unique in regards to DCCC. … All winners are final.”

Although there were no official voting results or articles in subsequent newspapers, Lake Charles was the obvious winner—and also the name that stuck.

In 1995, which was 22 years after it was completed, Lake Charles was renovated and fitted with a 30 millimeter polyvinyl chloride (PVC) liner.

Today, Lake Charles, oftentimes referred to as Lake Chuck, has a surface area of approximately 1.5 acres and has a maximum depth of about 12 feet. Because it is stocked on a regular basis with channel catfish, crappie, largemouth bass, trout and bluegill, it continues to be a popular fishing spot in Ford County.

Charles Barnes—DC3’s longest serving head administrator—served as college dean from 1959 to 1965. After the title was changed to college president, he then served as president from 1965 to 1982. He passed away, in 2000, at the age of 82.