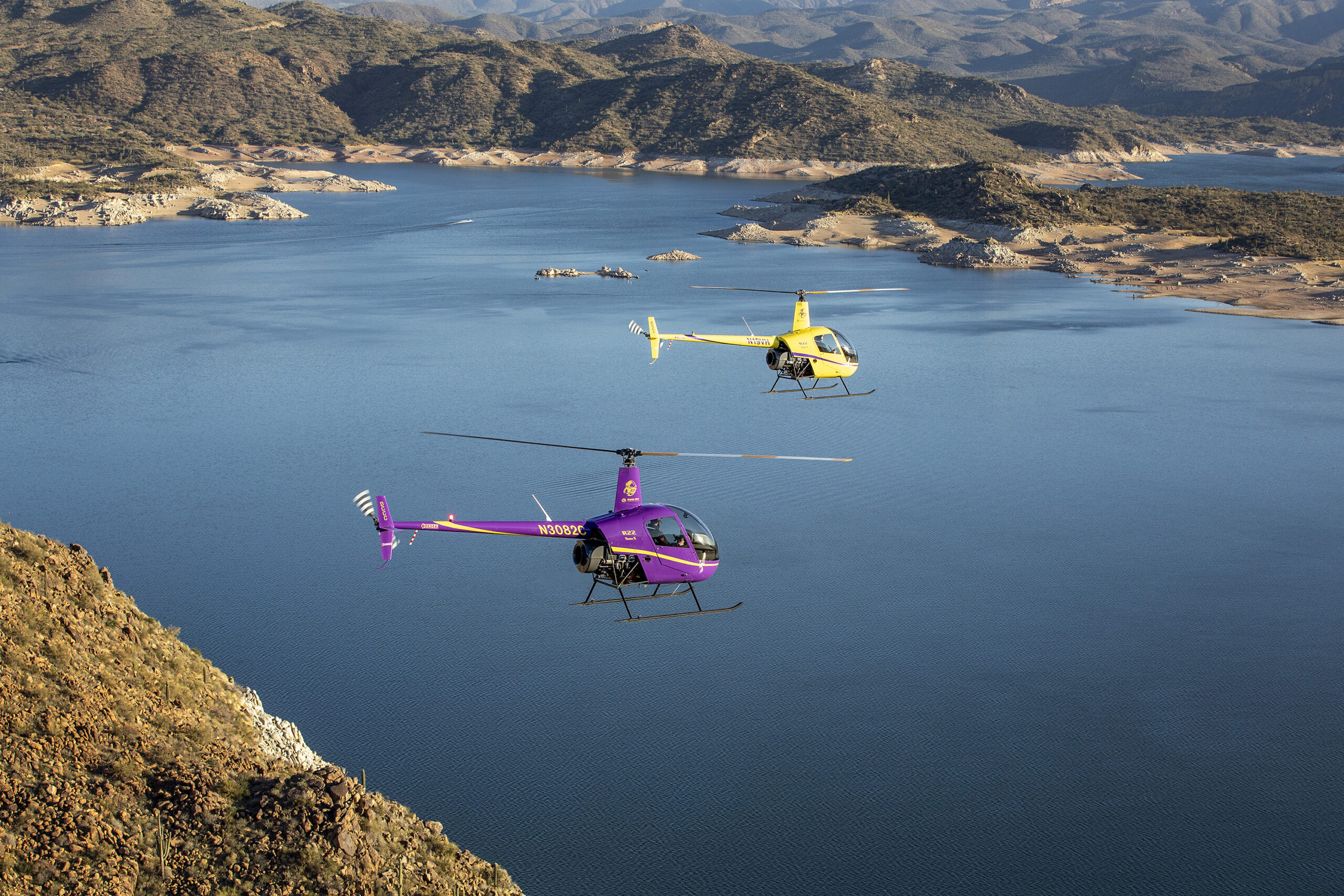 For its Flight Instructor program, Dodge City Community College (DC3) mainly utilizes Robinson R22II helicopters, and its flight students have access to a total of 18 helicopters, including three that are branded with DC3 colors and or logos. [Photo by Jennifer Jones]

This summer, the Dodge City Community College (DC3) Flight Instructor program is boasting its largest enrollment ever at its Chandler, Ariz., location. The program, which is in its 13th year, is readying itself for more than 50 students.

“In doing so, DC3 has consulted with and continues to work closely with some of the most experienced helicopter flight training organizations in the world,” he said. “These relationships have been not only helpful to DC3’s course development, but have also helped to give DC3 program graduates a real advantage in job placement and career development within the helicopter industry.”

The two-year Associate of Applied Science (AAS) degree program, which is taught in five semesters, is a comprehensive program of study that has been specifically designed to take students with no aviation experience through their Federal Aviation Administration (FAA) Commercial Pilot and Flight Instructor qualification, with the completion of the AAS degree, John said.

In addition, the program is taught fully in-house, which means all classes—including flight classes—are taught by DC3, at the college’s teaching location in Chandler or at the nearby Chandler Municipal Airport.

“The DC3 Flight Instructor Program has been designed around realistic completion times for each semester,” John said. “This means that we have allotted sufficient flight hours and ground training hours to enable a motivated and hardworking student to be able to successfully finish each semester’s workload in one semester. This greatly reduces the chance of a student having to repeat a semester or semesters.”

“Over the five semesters of training, the program provides for 280 hours of real helicopter flight training (with no simulators), 185 hours of one-on-one helicopter ground instruction, and nearly 600 hours of aviation classroom instruction,” he said. “All of this helicopter-related training is for one purpose, to produce graduates who will be the most prepared, safe, and effective helicopter flight instructors that they can be.” 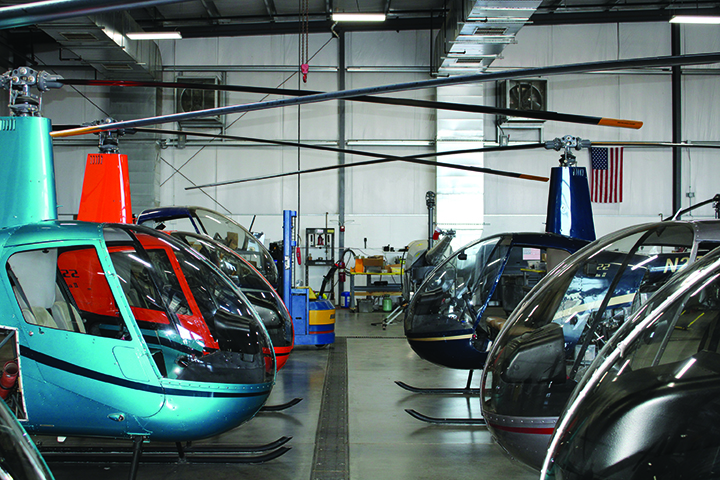 DC3-Arizona has an agreement with Quantum Helicopters, which gives it access to Quantum’s fleet of aircraft, as well as the usage of Quantum’s airport facilities. [Photo by Lance Ziesch]

Quantum Helicopters
DC3 has an agreement with Quantum Helicopters, also located in Chandler, which gives it access to Quantum’s fleet of aircraft, as well as the usage of Quantum’s airport facilities. Since its inception in 1993, Quantum has grown to be one of the busiest and most respected helicopter flight training schools in the nation.

Operating out of the Chandler Municipal Airport, Quantum is the sole operator of what is believed to be the largest public heliport in the United States. It includes 36 landing pads with taxiway access, a large turf training area, nearly 8,000 square feet of office space, and a 14,400-square-foot hangar for aircraft storage and maintenance.

Neil Jones, who serves as president at Quantum Helicopters, said he thinks the program is growing by leaps and bounds. And although the current enrollment is up to 50 students, he said the existing program can handle up to 85, which means there is still room for growth.

“I think things are going about as well as they could possibly go,” he said.

In 2017, Jones said John approached him about a new partnership for its Flight Instructor program.
“I told somebody last week, it felt like it was a match made in heaven, although I wasn’t sure when [John] first approached me, because [DC3] had been working with one of our competitors,” he said.

That competitor—Universal Helicopter Inc.—was DC3’s original partner when the college launched its flight program back in 2008 in Dodge City.

“When you know the history and where it came from, I don’t think it could be going any better,” he said.

Jones said the enthusiastic and supportive relationship Quantum has built with DC3 has exceeded his expectations, especially the support from the college’s Board of Trustees.

“I’ve been to Dodge City twice, and I’ve had three or four representatives of the Board visit our facilities in the past three years,” he said. “The level of dedication I’ve seen toward making the program, and more importantly their students, successful from everyone at the college has been incredible.”

The Program
For its Flight Instructor program, DC3 mainly utilizes Robinson R22II helicopters. And the college has access to a total of 18 helicopters, including three that are branded with DC3 colors and or logos.

“The Robinson R22 has dominated the civilian helicopter market as the flight trainer of choice, and as the helicopter that new instructors are, by far, most likely to obtain their first job in. And the R22 dominates the flight instruction market due to its extreme cost effectiveness, reliability, and overall quality,” John said.

The current cost of the DC3 Flight Instructor program is around $120,000. However, DC3 has an active program for military veterans who are seeking to use their Post 9-11 GI Bill® education benefits. By using these Veterans Administration (VA) benefits, qualifying veterans can receive up to 100% financing, which can even include the FAA Private Helicopter Certificate.

“Flight training adds significant expense to a degree program,” he said. “Because DC3 is an accredited college, students also may be eligible for various types of loans and financial aid.”

Student Stories
The cost of flight school was a big concern for Talon Lee, who is a second semester—instrument student at DC3-Arizona.

“I actually [had] just got out of the Army, and I wanted to try something different,” he said. “I was on the fence about getting out, but I made the decision that I wanted to fly helicopters. I had no idea how I was going to do it.”

Figuring his Post 9-11 GI Bill® would cover at least some of the costs of flight school, Lee initially thought he might have to commit to a year-long contract in Afghanistan to make money for the remainder of his schooling expenses. However, after visiting with staff at DC3-Arizona, he found out his expenses would be covered.

“Once I found out… my flight school was 100% covered, I was really excited about that,” he said. “I just didn’t want to use the GI Bill® to be another guy who goes for a criminal justice degree to be a cop. A lot of guys do that, but I wanted to do something different. The school here has been really, really awesome.”

Another DC3 student, Jessica Brandal, who graduated from the program in spring 2021, was a former Air Force airborne linguist. After the military, Brandal decided to try a flight school in Virginia, which didn’t work out for her like she had planned.

“Here at Dodge City, you have a semester timeline versus a lot of schools where it takes two or three semesters to get just one rating,” she said. “That can be a bit frustrating, when you are trying to progress in your career, and it is taking a lot longer than you intended. The flight instruction that I received was a 1,000 times better than what I was getting before. I only have awesome things to say about my experience.”

DC3’s Chief Flight Instructor, Tim Brennan, said he is excited about the program’s increased enrollment, and he hopes that the recent graduates can be hired back with DC3 and Quantum as full-time instructors.

“The challenge we are facing this summer is a huge group,” Brennan said. “It’s a good problem to have, but it has been a little stressful, especially training new instructors, managing their growth, and being able to accommodate all of these new students who are joining the program as the word spreads.”