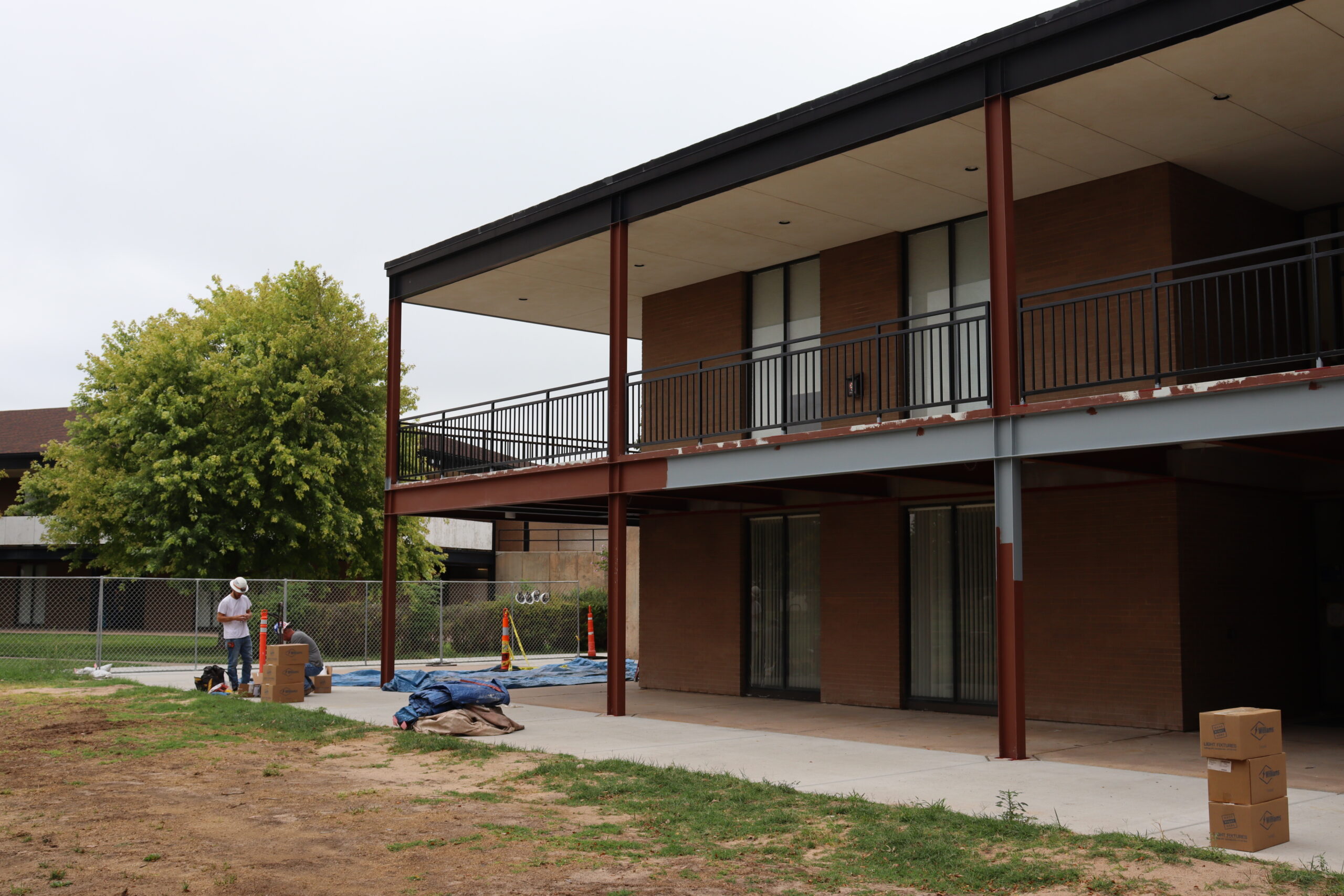 The balcony restoration project for the Dodge City Community College (DC3) Humanities building, which began earlier this summer on May 17, is expected to be fully complete by Aug. 27.

The Humanities building, which is one of DC3’s original 1970 campus structures, was designed with an open-air, white-stucco balcony along its western side—a design aspect that is repeated in two other original campus buildings: Fine Arts and Science & Math.

Although aesthetically pleasing, the balcony design created by Caudill Rowlett Scott—the Houston-based architectural firm that designed the 1970 campus—was at odds with the harsh Kansas winters from the very beginning because the solid stucco railings blocked the necessary sunlight needed to help melt winter ice.

So, to cope with the ongoing ice problem, loads and loads of salt and ice melt were scattered across the icy walkways throughout the decades. And after 51 years of constant freezing and thawing during the winter months—and the effect of all of the salt and chemicals, which eventually weakened the concrete and caused it to crumble—the northeast end of the balcony finally collapsed on April 14. 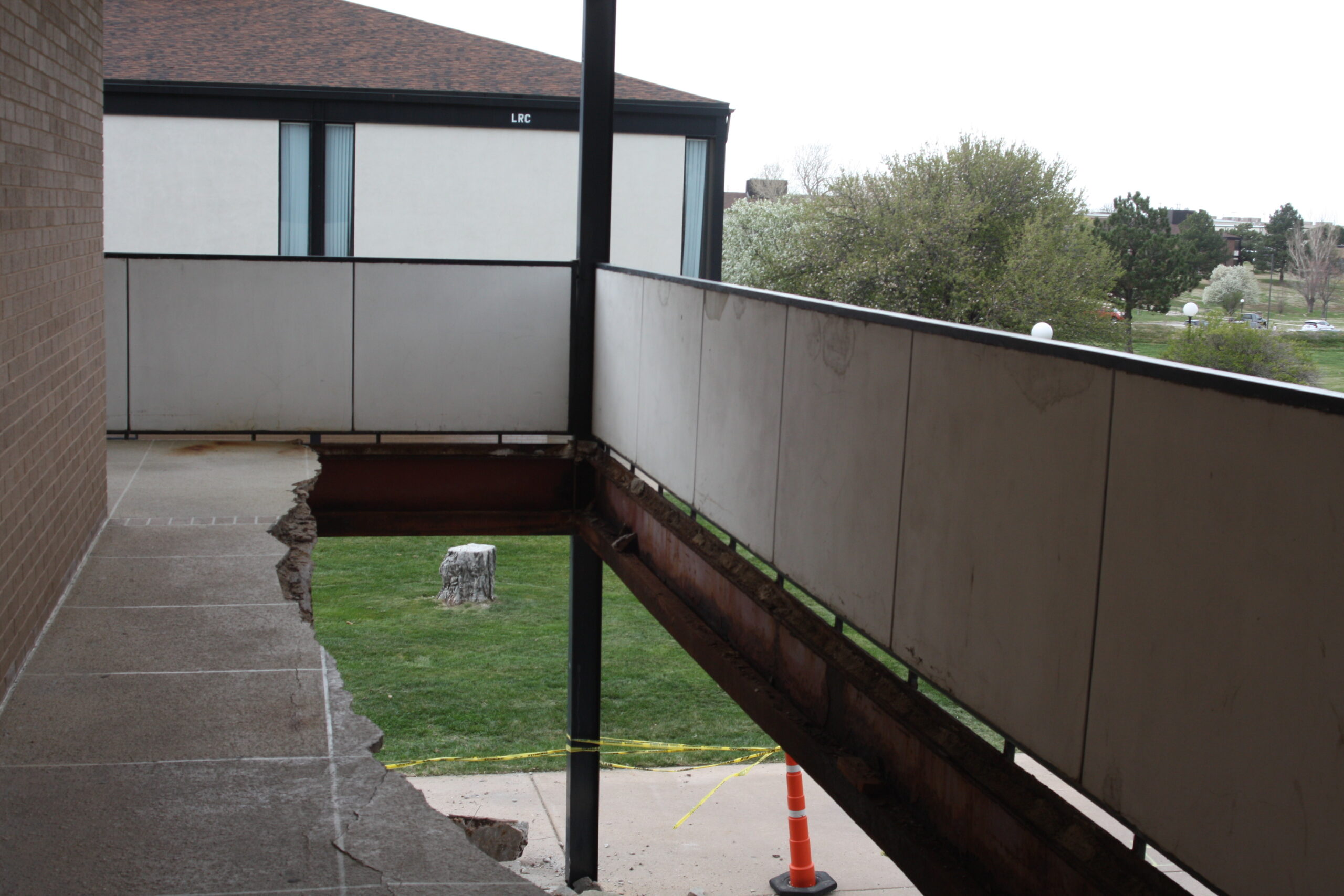 On April 14, after decades of corrosion, the northeast end of the Humanities balcony finally collapsed. [Photo by Lance Ziesch]

According to Jared Stevens, DC3 Assistant Director of Facilities and Operations, another problem with the Humanities balcony was that it had begun to slant toward the building, causing snow and rain to funnel toward the building’s brick wall and into the enclosed soffit under the walkway.

To alleviate both of these problems, the new balcony railing is made of square black metal tubing, instead of white stucco, which will better allow sunlight to melt winter ice, he said. And the new concrete walkway slopes slightly away from the building.

“The new balcony will dry out a lot faster,” Stevens said. “In the future, we hope we can avoid as much of a freeze-and-thaw cycle as we can.”

Of course, another noticeable difference in the new Humanities balcony will be how it looks underneath, Stevens said. The old one featured a heavy white stucco soffit, which completely covered the underside of the concrete walkway. And although the soffit gave the balcony a more finished look, it also hid the extent of the balcony’s continuing deterioration.

“The underside of the new balcony is different from the original in two main ways,” he said. “The new concrete walkway was poured over a layer of corrugated steel for added strength, and there will not be a stucco soffit under it. Instead, the underside will be painted all black, similar to what is currently underneath the bridge going from Science & Math to the Science & Math Annex. With it open, we can better monitor any potential problems.”

And like the round can lights, which were installed in the white stucco soffit, the new underside of the balcony will feature round LED light fixtures that are similar in size and design to the originals, he said.

A couple of the reasons for the change order was because the project ended up requiring more labor and materials than what was originally planned, and because the construction workers had to create processes and solutions for the unique problems they encountered along the way. One such example was figuring out how to remove the entire concrete walkway safely, as it was originally constructed as part of a monolithic concrete slab that extended across the entire second floor of the Humanities building.

“The construction workers had to saw through the concrete at the edge of the building,” he said. “Then before the new concrete was put in, they had to install additional I-beams on the north and south ends, to get the walkway up to 2021 codes, and add steel anchors that connected the new concrete to the remaining slab. It was quite a labor-intensive process.” 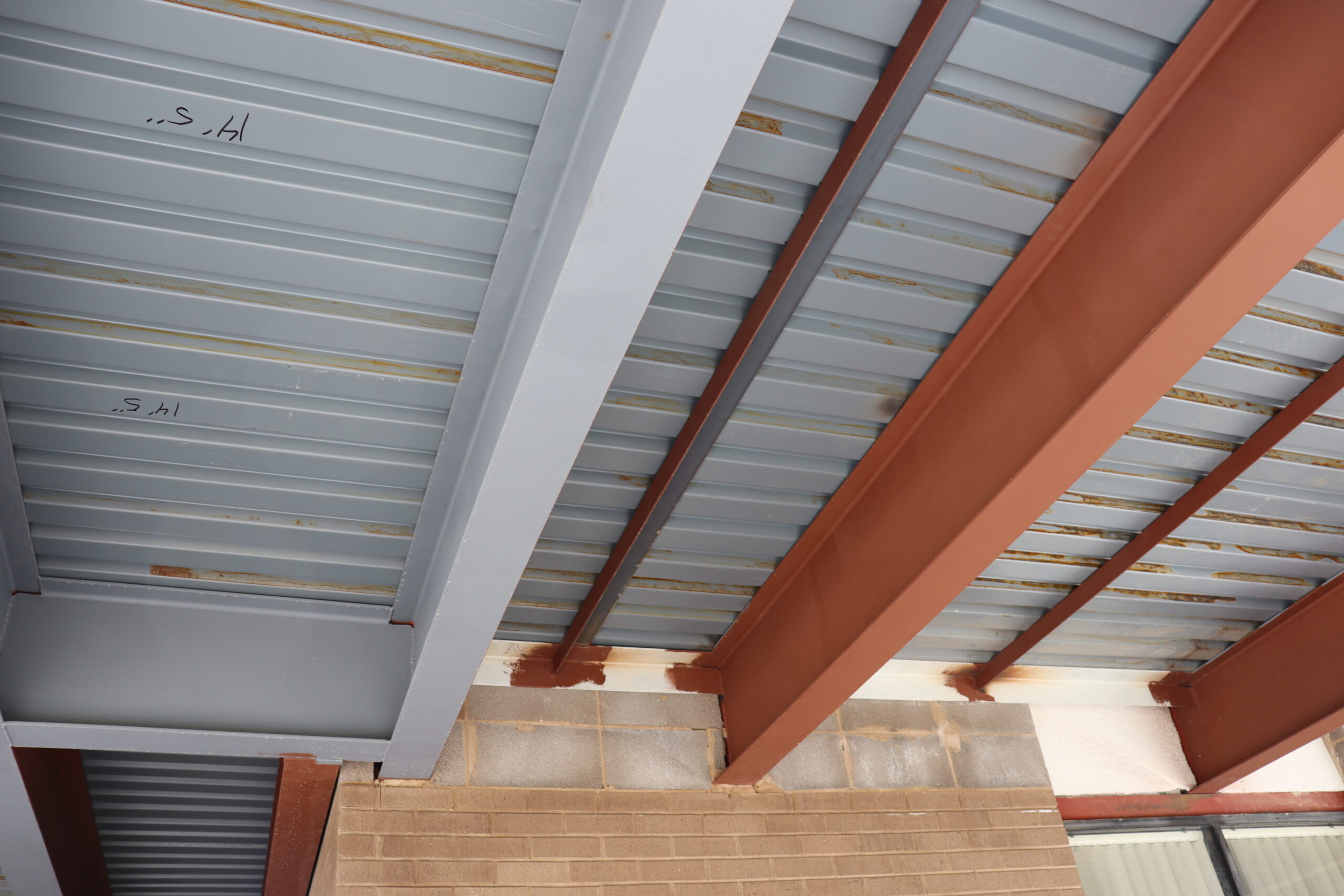 OUnlike the original 1970 balcony, the 2021 replacement includes more overall support features, such as additional I-beams (left) and a layer of corrugated steel under the concrete walkway. [Photo by Lance Ziesch]

DC3 President, Dr. Harold Nolte, said the college knew beforehand that the balcony replacement project would be expensive. However, because no one initially knew the extent of the damage or the best method for repairing such a unique problem—due to the way the building was constructed—the costs were hard to estimate.

“Because of the current expenses on this first balcony, it makes me concerned about the other two,” he said. “But, safety is first. We have to make sure our campus is safe.”

Nolte said there has been a lot of deferred maintenance on the DC3 campus during the last few years, but he said that is all changing, and things are starting to “run like they should.”

“Honestly, it’s a lot more fun to build bright, shiny new buildings,” he said. “But, we need to take care of the ones we already have first. It’s important to have our students feel good about their college experience, and a big part of that is providing them with a well-maintained and safe campus environment.”

HEERF III funds, which were authorized by the American Rescue Plan (ARP), Public Law 117-2, were signed into law on March 11 and provide $39.6 billion in support to institutions of higher education to serve students and to ensure learning continues during the COVID-19 pandemic.

The replacement schedule for the remaining two balconies on the Fine Arts and Science & Math buildings is not clear at the moment, Stevens said. However, he said the college’s Maintenance Department has already removed the stucco soffits from both of the other balconies, which will help reduce future construction costs.

“We have an engineer coming to look at the other balconies to assess the situations,” Stevens said. “Depending on his findings, we will determine the schedule for the other two. If all goes to plan, all of the balconies should match in the end.”

Because the college already has paid for the design and engineering work on the first balcony walkway, the remaining two projects hopefully should not cost as much, Cermin said.

“We should experience cost savings, if the scope of the projects is the same,” he said. “It is possible, but not likely, that the second and third walkways may not require a complete teardown and replacement [like the Humanities building].”