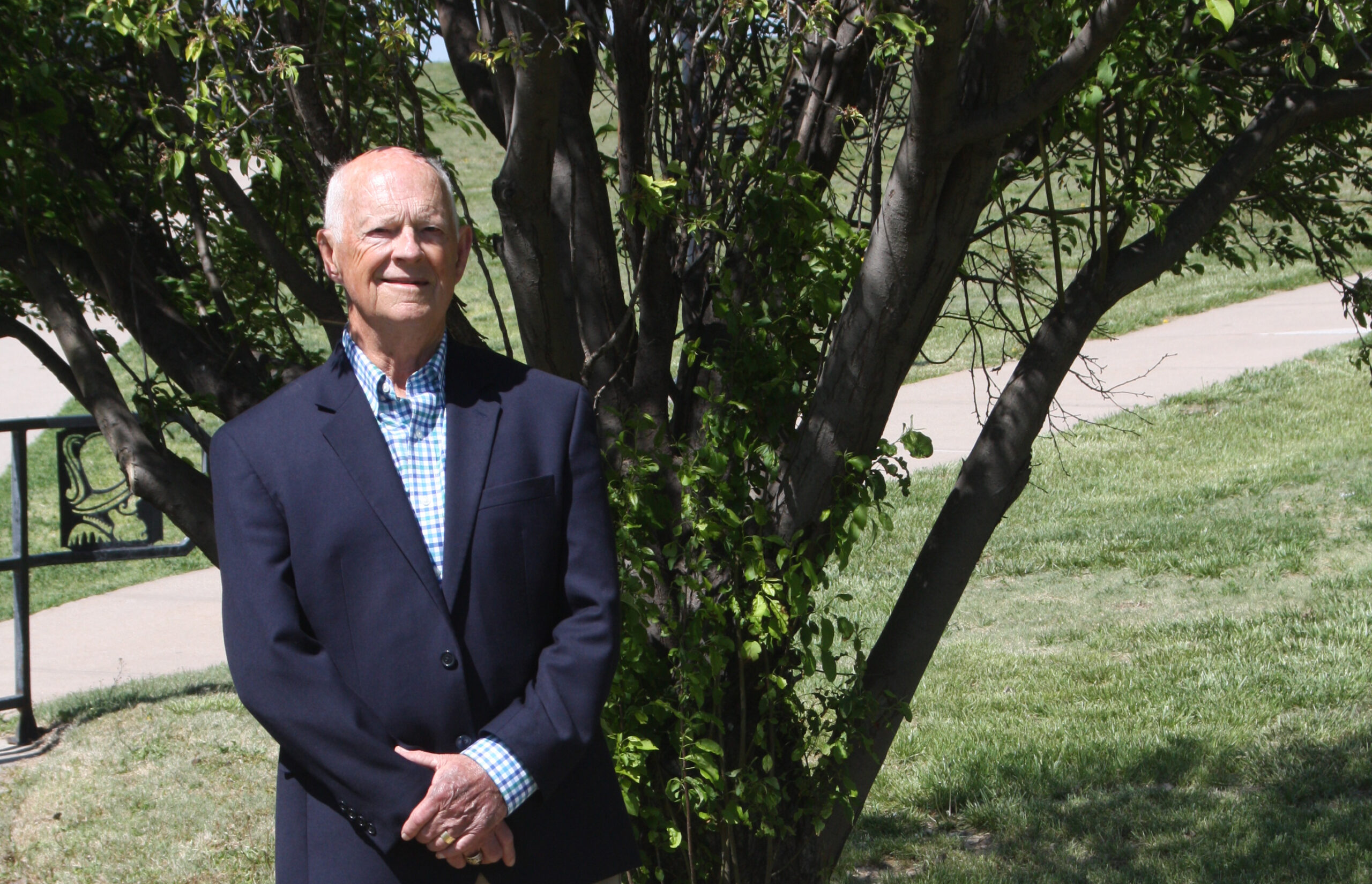 Larry Burke at McLain Grove on May 7. [Photo by Lance Ziesch]

Over the past 20 years, a good portion of the landscaping improvements on the Dodge City Community College (DC3) campus have been due to the efforts of former DC3 history professor, Larry Burke, who raised $44,000 for campus beautification initiatives during his tenure at the college.

“I got involved because I felt the grounds needed more trees and plantings and because the islands between the entry and exit drives were dry and not inviting,” Burke said. “I feel a college’s campus is important in creating an inviting atmosphere. This also can be an advantage to recruitment.”

“When we moved from the old Second Avenue location to the present locale, the campus was nice, but raw and unfinished,” he said. “It needed more trees and plantings to give it character. The current landscaping gives the campus a more inviting, finished, and collegiate feel. It’s more appealing and much prettier.”

The “current landscaping” that Burke refers to today is a combination of beautification projects that have been coordinated throughout the past 51 years—with several of the most recent being initiatives begun by Burke himself.

Burke, who served as the chairman of the Campus Beautification Committee, helped secure funds for three main campus-improvement projects during his time at DC3: McLain Grove, Scroggins Park and McLain Greenway. These three projects alone resulted in the plantings of hundreds of trees and shrubs, along with the installation of accompanying sprinkler and drip irrigation systems.

“The majority of trees on campus came from these grants, and I am proud of my work on these actions, pleased with the committee, and grateful to the entities whose funds made the projects possible,” Burke said. “My brother, Richard Burke, was president when these actions were initiated and completed, and he gave us his full support.”

Burke said a large portion of the funds he raised for these projects was due to a relationship he formed with the family of F.M. Dale McLain and his wife Melba.

“Dale was a high school history teacher at Sublette High School who moved to Dodge after retirement and taught for a few years part-time in the History Department at DC3,” Burke said. “Dale’s daughter, Joan Dale, married R.D. Hubbard, a wealthy entrepreneur who owned Ruidoso Downs horse track in Ruidoso, N.M., and other holdings.”

Together, the Hubbards founded the R.D. and Joan Dale Hubbard Foundation in 1986, which gives grants to deserving organizations, especially educational institutions, Burke said.

“Between 2000 and 2002, I was able to raise substantial amounts of money for campus beautification because of my friendship with Jim Stoddard, who was the executive director of the Hubbard Foundation,” he said.

This relationship with Jim Stoddard and the Hubbard Foundation actually went back several years before the beautification projects, Burke said. It all started with a McLain scholarship, which is still active to this day through the DC3 Foundation.

“Prior to my becoming a full-time history professor at DC3, Ed Herrin, Professor of Sociology at DC3, had obtained funds from the Hubbard Foundation to underwrite the McLain Scholarship, intended for history majors,” Burke said.

“When I became the history professor, I would meet with Ed and Dale to select the winner from applications,” he said. “And Jim Stoddard would often come up to sit in on our meetings, and I got to know him as a result.” 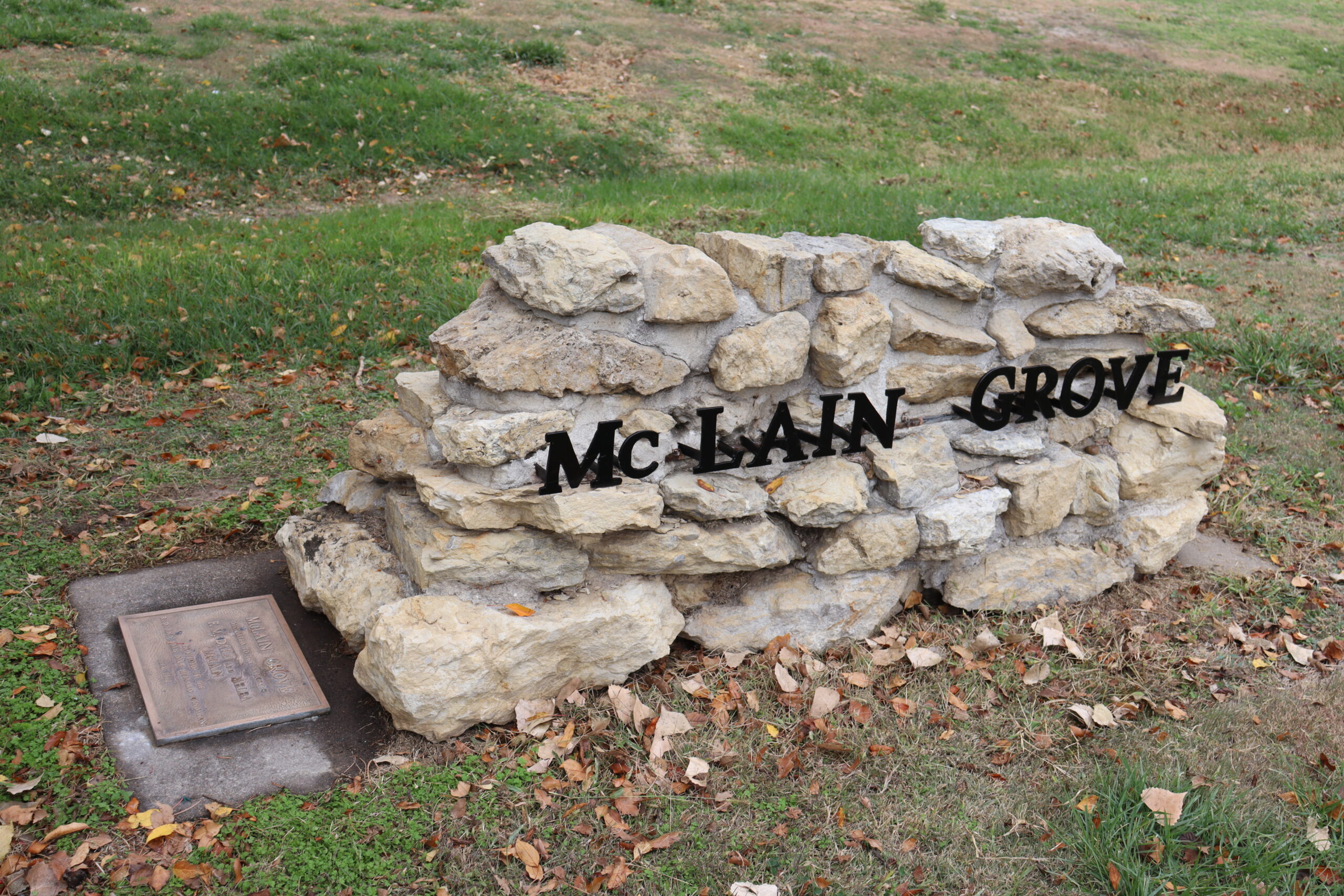 McLain Grove
The first of Burke’s three main campus-beautification efforts was the McLain Grove project in 2002, which was funded by a grant of $16,000 from the Hubbard Foundation, that established a grove of 85 trees in the grassy draw that separates the east and west sides of campus, north of the sidewalk that connects the Student Union with Shelden Hall.

“As a result, we proposed to name the area McLain Grove and designate it with a stone monument and bronze plaque,” he said. “This grove enhances the beauty and aesthetics of the campus.”

In addition to the grove, the grant also included funds for planting locust trees to line the main entry and exit drives of the college, Burke said.

“All the trees planted in this project also had drip systems installed to water them,” he said.

Burke, who served as the project officer who coordinated these efforts for DC3 and the DC3 Foundation, said the project was completed and dedicated on May 6, 2002, with a stone monument, which was made by then DC3 Professor of Art, Jim Wilson, and the DC3 Art Department. This marker, which is comprised of multiple pieces of limestone and includes black metal lettering, also features a small bronze plaque on its south side. 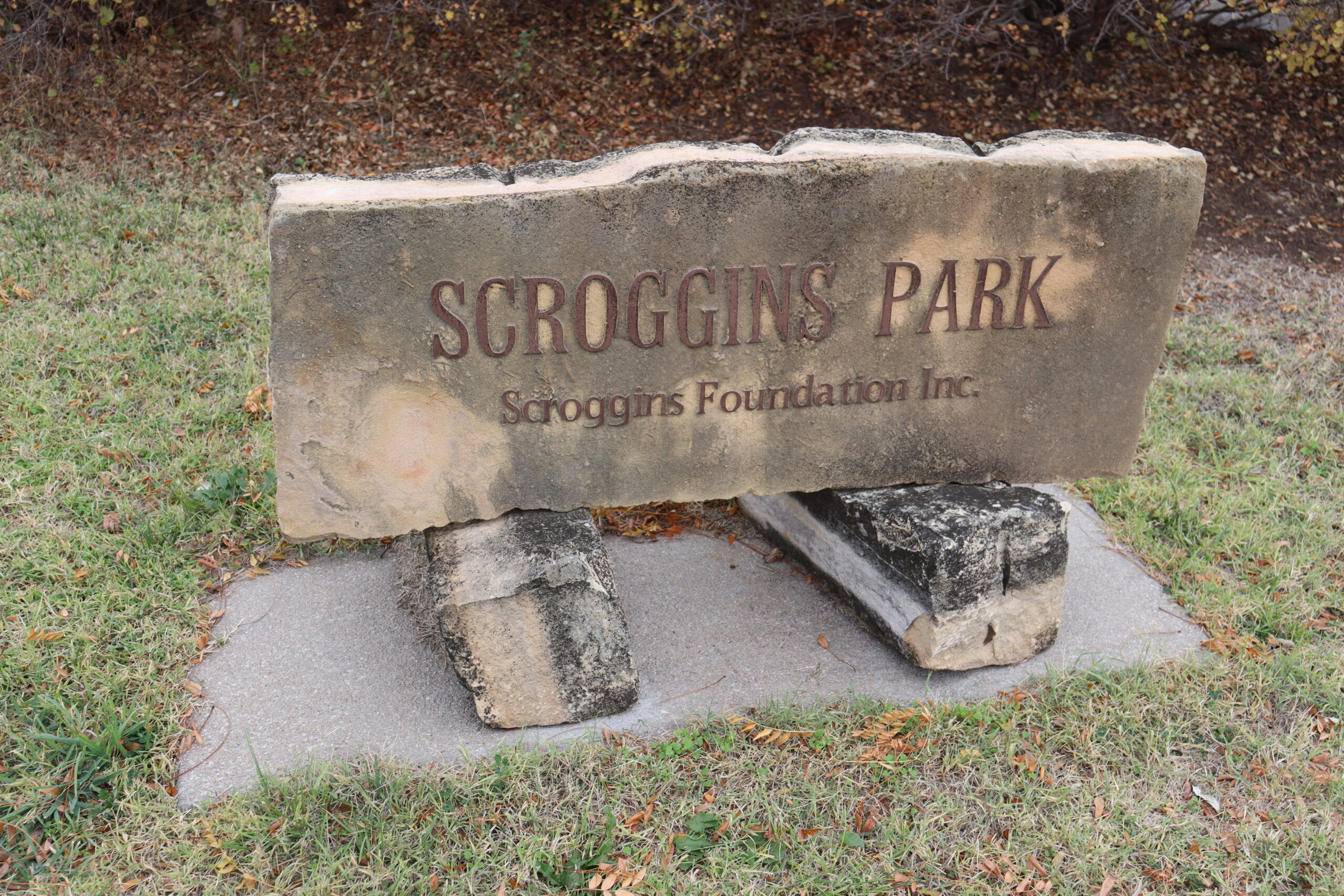 Through the generosity of the Scroggins Foundation, Burke was able to obtain a grant of $10,000 to fund the planting of trees and grass and to pay for new sprinkler and drip irrigation systems for the area east of the Humanities Building to the south parking lot. This grant also allowed for tree planting along the circle drive around the southern part of the campus down to Lake Charles.

In 2015, the Scroggins Foundation, which was founded to honor a former Dodge City teacher, Arthur Scroggins, merged with the Community Foundation of Southwest Kansas, Burke said. 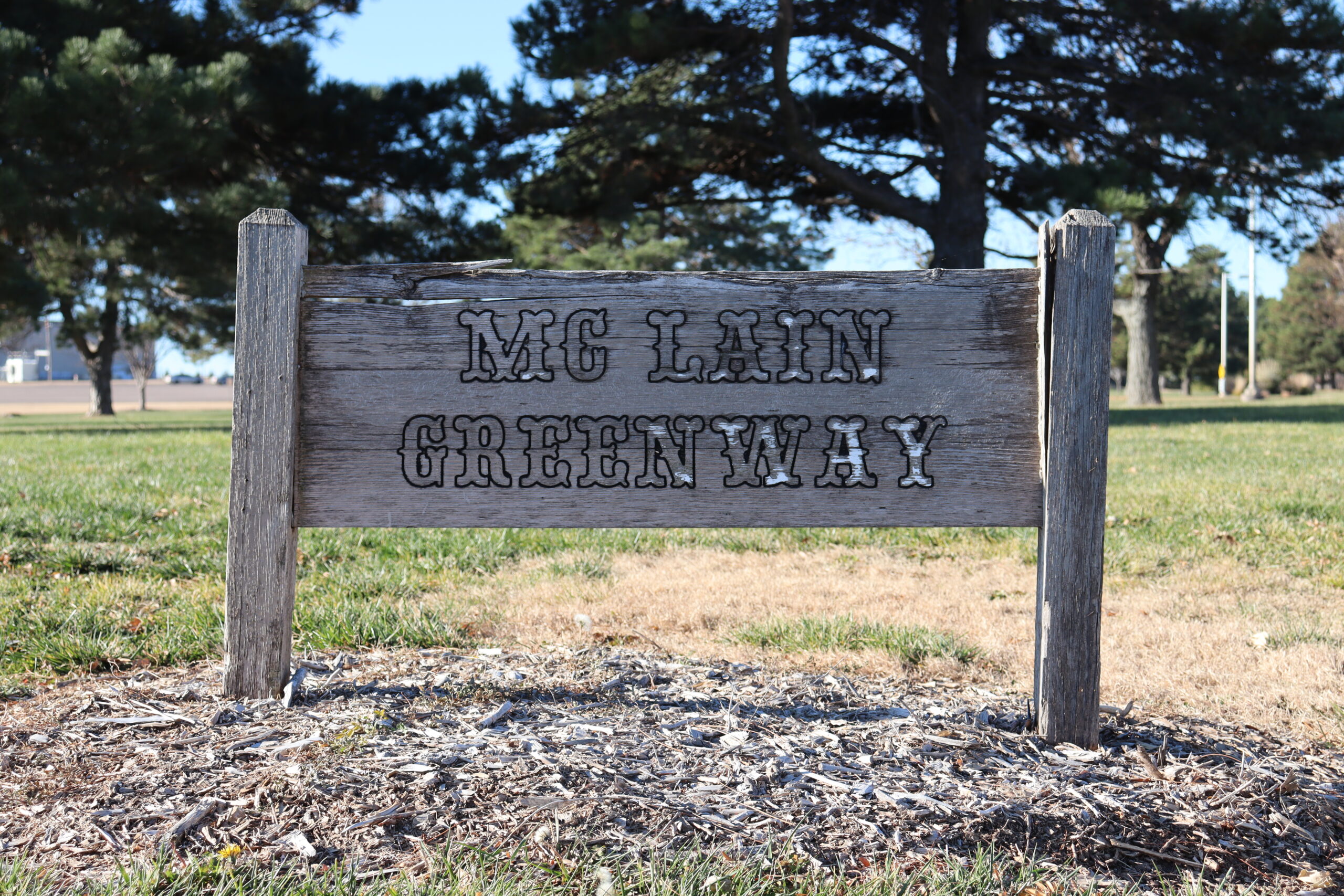 McLain Greenway
And the third campus-improvement effort, which Burke also served as project officer, was the McLain Greenway project. This second sizeable grant of $18,000 from the Hubbard Foundation was given for re-landscaping the grassy islands between the main entrance and exit drives.

“This project entailed refurbishing the sprinkler system servicing the islands and replanting appropriate grasses,” Burke said. “Additionally it included planting a variety of shade and flowering trees, as well as bushes and shrubs native to the area.”

With the 42 locust trees planted to line the campus drives during the McLain Grove project, these additional plantings provided “a beautiful and enticing entrance to our campus,” he said.

Also included in this third project, which was completed in 2004, were funds to landscape the playground area around the Childhood Development Center on the southeastern corner of the campus.

Today, two engraved wooden signs mark the McLain Greenway on both the main entry and exit drives. But because the signs are nearly 20 years old and are starting to fade and deteriorate, the DC3 Foundation and the DC3 Marketing Department are considering replacement signage, which would incorporate a bronze plaque and an outdoor seating area on the greenway itself. Burke, of course, has been asked to be a part of the new signage decision-making process.

Although Burke officially retired from DC3 in 2012—and now lives in Lawrence, Kan.—he continues to stay involved with the college as a DC3 Foundation Board member, which means he still makes frequent trips to campus.

“It is very gratifying for me to drive through and around the campus and know that I played a part in helping to create a more inviting atmosphere,” Burke said. “I drive through the campus every time I am in Dodge and feel good about what I see, especially if it looks like the things I helped with are being well maintained.”