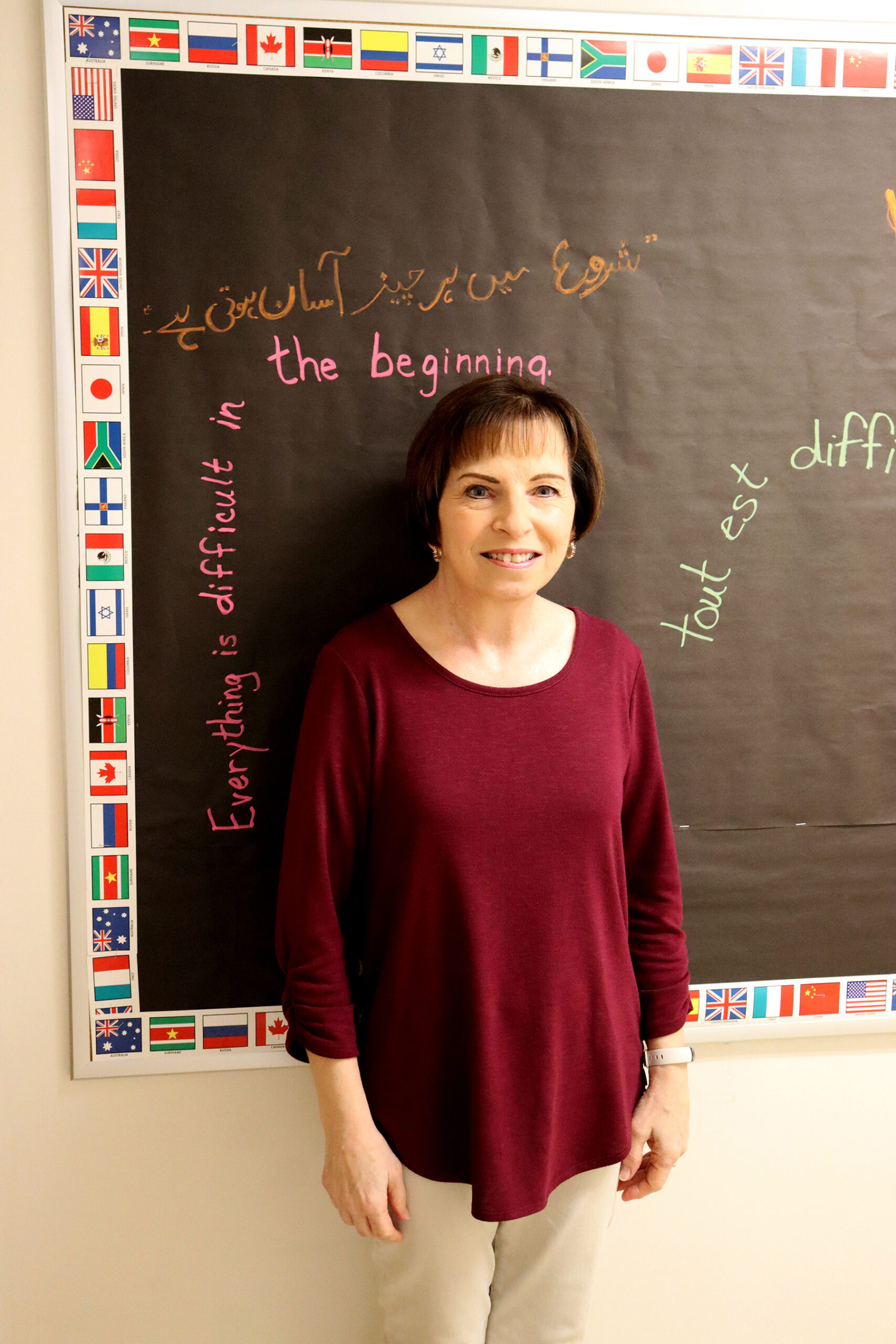 Laura Graves from the Dodge City Community College (DC3) Adult Learning Center (ALC) retired in December 2021 after 33 years. Graves, who served in a variety of capacities during her tenure, began working at the ALC in 1988, when it was located on First Avenue. [Photo by Lance Ziesch]

Graves, whose last day on the job was Dec. 16, 2021, began working at the ALC in December 1988, which was only a month after she and her family had relocated to Dodge City from Grand Island, Neb.

“I began as a part-time GED tutor, with students coming to an open study hall throughout the day,” Graves said. “After my first year, the number of English as a Second Language (ESL) students had increased, and I was asked to teach ESL.”

The ALC was organized in 1974 and was first located in an old house at 1001 N. Second Ave. This structure, which had formerly served as the home of DC3’s Music Department, had been vacated when the college moved to its new campus in March 1970.

By 1981, however, the ALC was looking for a new home. The properties on the west side of the 1000 block of North Second Avenue were being cleared for the construction of the new Dodge City Public Library.

“The center on First Avenue became a very crowded place,” Graves said, of the two-story red brick house that served as the ALC from 1981-1995. “We only had room for two ESL classes, one in the basement and one upstairs. But we crammed as many students as possible into those two spaces.”

At the time, Graves taught classes in the tiny ALC basement with two eight-foot tables running down the middle of the room and extra chairs lining the walls. In this arrangement, students were “elbow to elbow and knee to knee,” she said.

“By 1993, we had moved ESL classes to two vacant spaces in the Village Square Mall,” she said. “We conducted two classes in one room and one next door. I have very fond memories of teaching class with only a curtain dividing my class from another one.”

In 1995, after spending 14 years at First Avenue, the ALC began a two-phase moving process to its third and current home at 700 Avenue G, which was the site of the former Dodge City Recreation Center.

“The upstairs was actually useable before the downstairs,” she said. “So, in September of 1995, we began our first ESL classes at the new location. All the instructors were so thrilled to have four walls and a door for their classrooms!”

Graves said that while the downstairs remodeling was being completed at Avenue G, the GED classes continued at First Avenue. Eventually, all ALC classes moved to the new facility, and the college later sold the property in 1998.

Of her many years at the ALC, Graves said her favorite memories are of her GED and ESL students. Through these teacher-student relationships, she had the opportunity to interact with people from just about every language group, culture, and religion.

“It was a privilege to share in the joy of GED students who just learned that they had passed their last exam and would receive their diplomas,” she said. “And it was a delight when math students had an ‘ah-ha’ moment and grasped a math concept they had never understood before.”

Another favorite memory for Graves was when one of her students from Somalia referred to her as “sister” during one of the ALC celebratory parties.

“I gave him something, and he said, ‘Thank you, sister.’ I know that that was a high compliment,” she said. “For him to call me sister meant so much to me.”

Through the years, Graves has worked with seven ALC directors and nine DC3 presidents. In addition to teaching ESL, she has served as a GED tutor, an ESL coordinator, a GED examiner, a pre-GED and GED instructor for math and language arts, and as a data-entry specialist.

“The main change over the years has been the use of technology in the classroom,” she said. “I remember coming home from work covered in chalk dust and being grateful for an overhead projector! Eventually we had multimedia stations, and I no longer had to hold up a textbook in front of 30 students and try to point to something on the page.”

Although she transitioned from being an ALC teacher to a data-entry specialist in January 2017, Graves maintained her connection with current students by greeting them each morning as they came to class. These daily interactions are something she said she will greatly miss, as well as the close relationships she has forged with her coworkers.

“The staff here are all friends,” she said. “We’re like family. So, I will I have to stick my nose in the door every once in a while to see what’s going on!”

Graves said she doesn’t have any big retirement plans at this point, except spending more time with family and friends.

“My husband retired a year ago,” she said. “We pastored what used to be First Assembly of God, which is now Cross Connection Church, for 32 years. And that’s what brought us to Dodge City originally. Dodge City is home, and our daughter is here. So, we’re going to stay right here.”