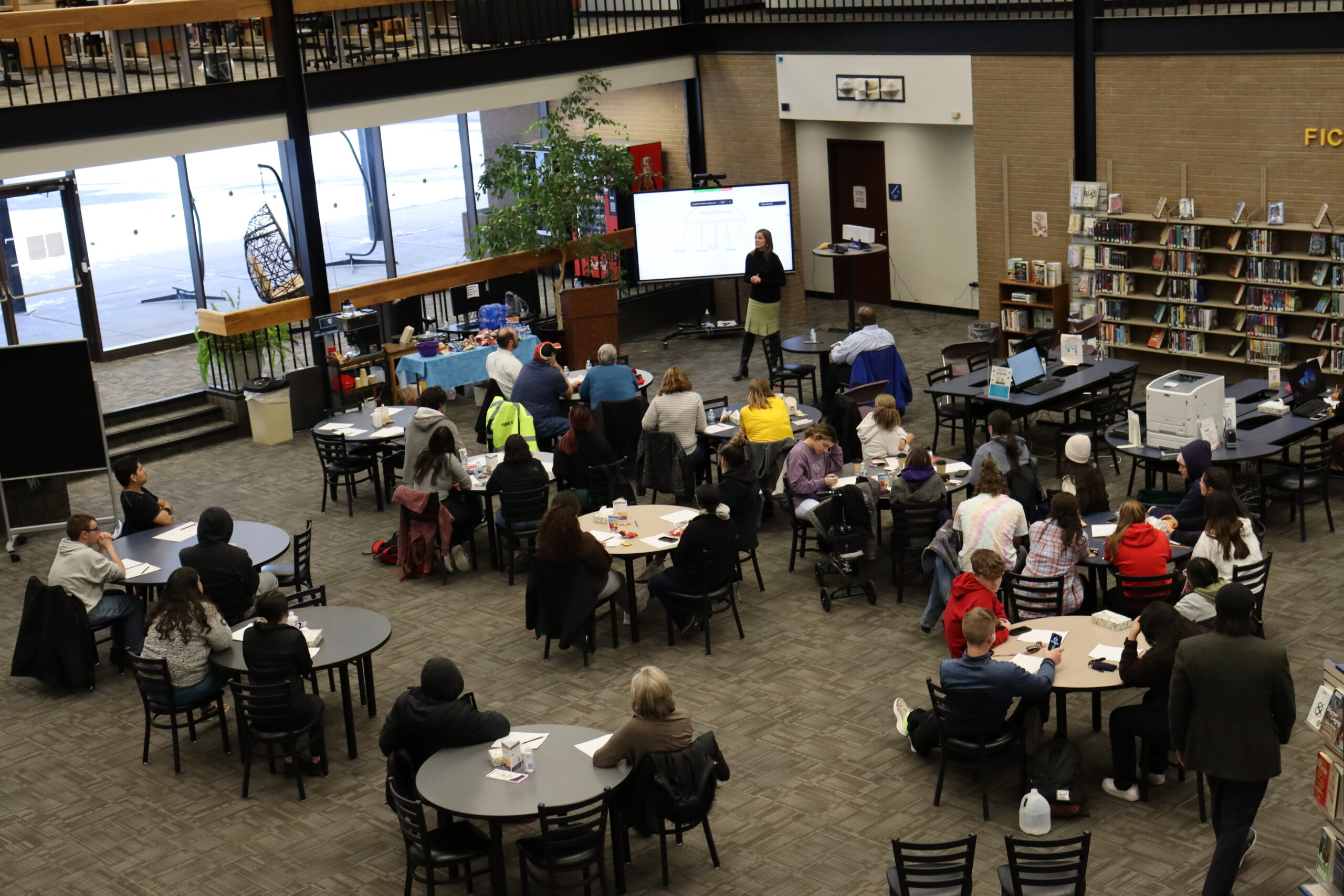 The DC3 Science Café allows attendees an opportunity to engage in scientific discussions outside of the classroom in a more informal, relaxed setting. After the first Science Café in November, DC3 started hosting the event monthly in January. [Photo by Luke Fay]

Although each school or organization can have a different take on how they run their Science Café, what remains the same is the goal of engaging the public in interesting scientific conversation.

Dylan Faullin, DC3 Professor of Math, was the driving force behind the creation of the Science Café series at the college. The idea began with a conversation he had with Kansas State University Physics Professor Bharat Ratra. Faullin, who has a bachelor’s degree in astronomy, was initially presenting a cosmological concept to Ratra when the two began emailing back and forth.

Ratra suggested to Faullin that he should consider creating a Science Café series as a way for like-minded professionals to explain topics they’re passionate about to students and to the public. The idea snowballed from there, causing Faullin to form a small committee to create the very first Science Café event at DC3 in November 2021.

“So we decided to test pilot one in November. It took a couple months to put that together, so we had Mike Webster, DC3 Assistant Vice President of Information Technology/CIO, present at the first one,” Faullin said. “I suggested the topic of cryptocurrency because it’s a pretty hot topic. I thought that might draw some people in, and it did.” 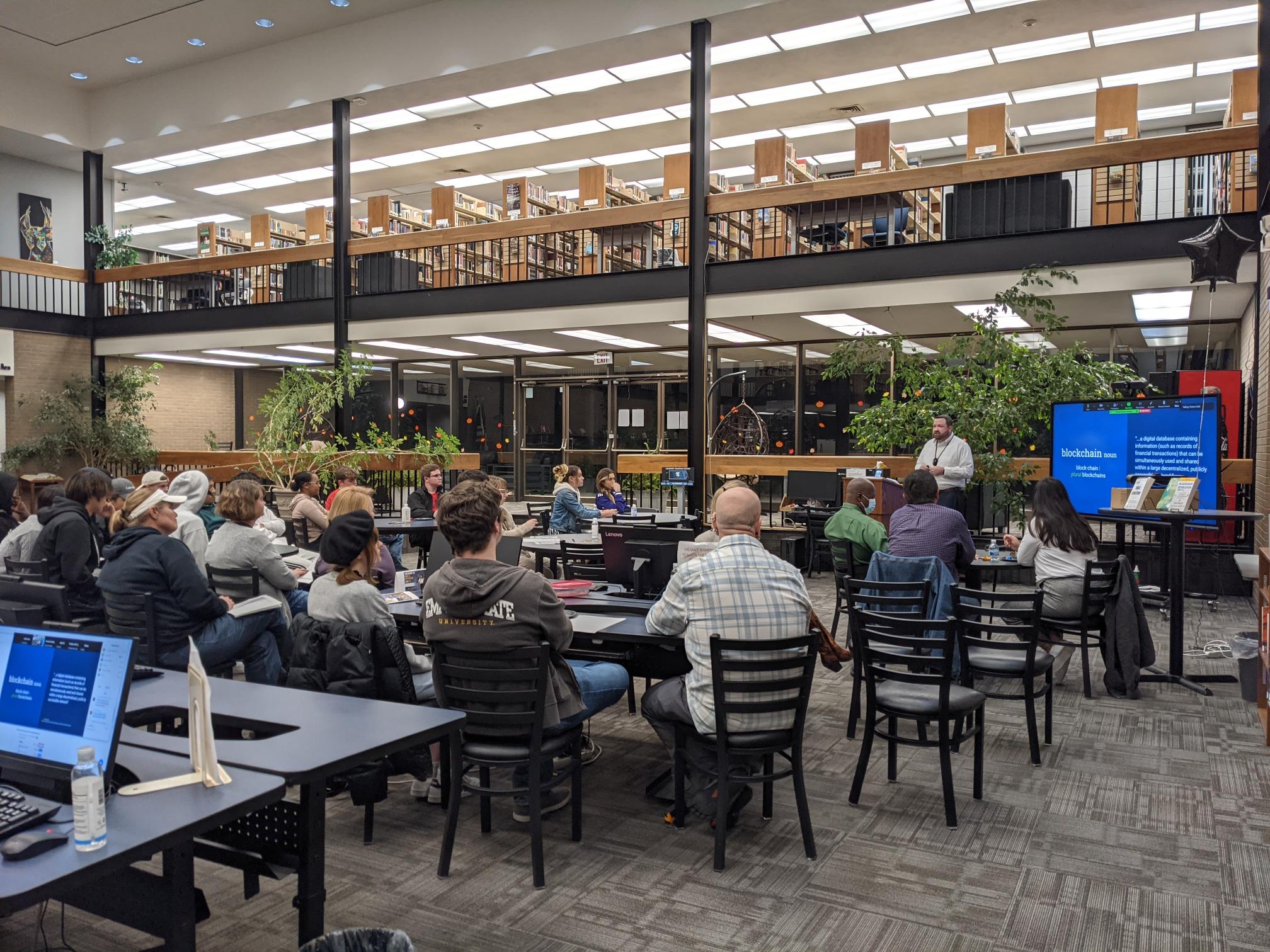 Following the success of the first Science Café, Faullin created a full committee of faculty and staff members, which consisted of himself, Julia Proctor, Holly Mercer, Stephanie Gruver, and Sherry Curtis Rogers.

“We decided on the topics for this semester based partially on our survey results from the first Science Café and the faculty’s knowledge of what their students tend to be interested in,” Faullin said.

The committee chose Dr. Monica Cook, DC3 Associate Professor of Biology, as their presenter for the most recent Science Café that took place March 10. The topic was marine science, an area of science that can be foreign to students who have not traveled out of the state of Kansas.

“My particular Science Café was important for students because it highlighted a topic that doesn’t get much coverage in a landlocked state like Kansas,” Cook said. “Marine science may not be on the radar for most students, but a student does not have to live on the coast in order to pursue marine science. I hope my discussion motivated anyone who may have thought about the ocean to pursue their dreams.”

Cook said she found it refreshing to be able to teach in a setting outside of the classroom.

“The Science Café takes place in a relaxed environment that allows the discussion to be much more enjoyable,” Cook said. “In a traditional lecture, there tends to be a bit more pressure on the student to capture everything the instructor is discussing in order to be prepared for upcoming exams.” 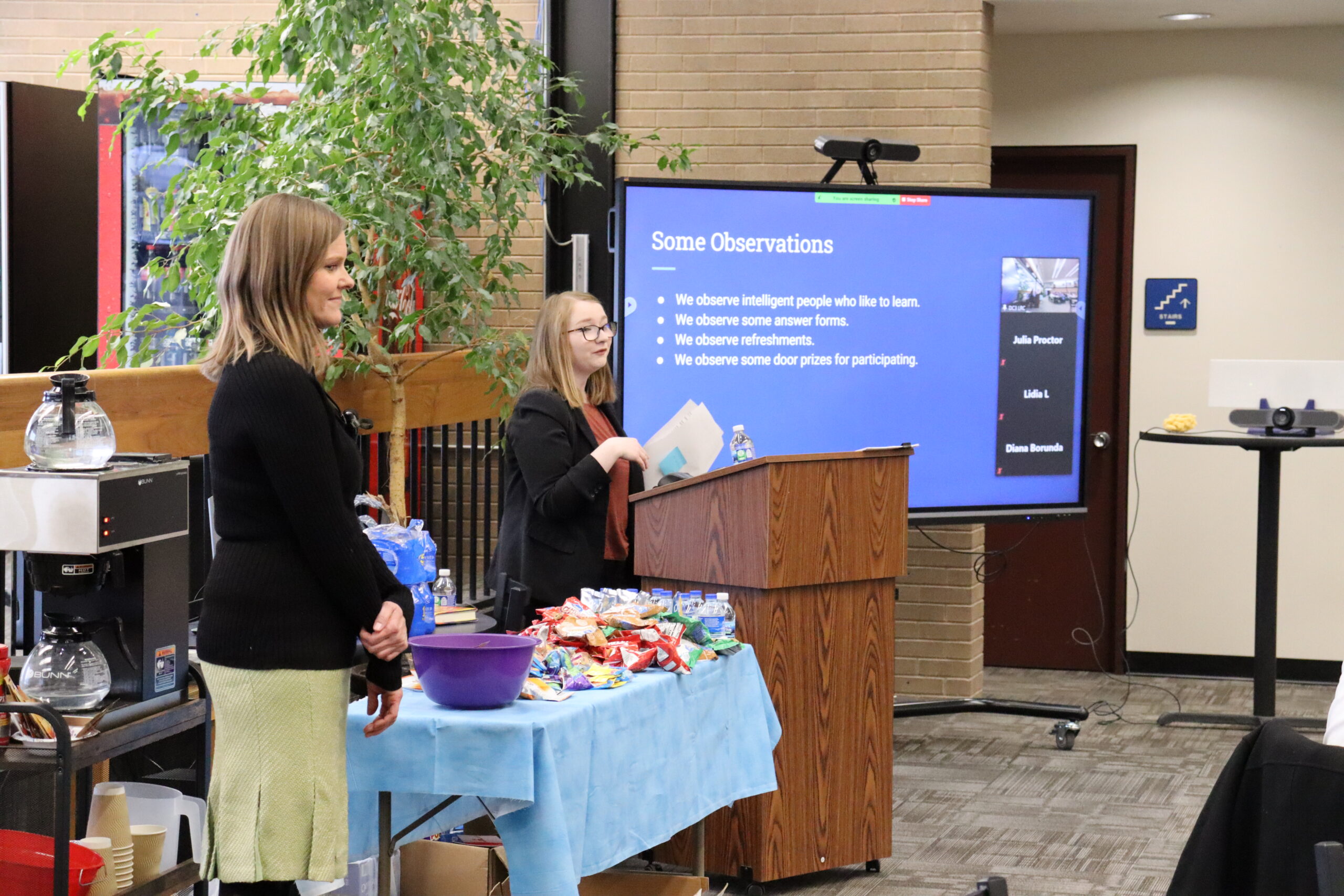 Julia Proctor, DC3 Instruction and Collection Librarian, serves as the unofficial emcee for the Science Café. Her duties include helping set up the refreshments and snacks as well as introducing the presenter. Proctor said she can see the effect the Science Café has on students firsthand.

“Well, I think one big thing for the students is exposing them to different ideas and maybe different paths that they might want to pursue outside the classroom, or maybe in the classroom,” Proctor said. “Students may decide to pursue taking different classes and things like that in the future because of this.”

At the February Science Café, DC3 students were able to see someone who had stood in their own shoes when former DC3 graduate, and Dodge City native, Dr. Larry Rodriguez chatted with students and the public about his career in biochemistry and his work with the Scripps Research Institute.

“Dr. Larry Rodriguez spoke a lot about his path. You know, he’s an alumnus,” Proctor said. “So, he spoke about how he started here at DC3 and how he’s now doing really excellent work. I saw a lot of interest from students there. I hope that these Science Café events can help inspire students and show them some of the things they can achieve.”

Faullin said the Science Café has been a “resounding success” on campus. However, he said there is always room for more student and community involvement.

“We’ve been doing trivia and other interactive activities to keep the audience engaged. I’ve been surprised at everyone’s enthusiasm for the event,” Faullin said. “The students do receive extra credit, but I actually think that even if there wasn’t extra credit they still would go because they really enjoy the atmosphere of it.”

The Science Café takes place monthly in the DC3 Learning Resource Center/Library and is made possible through the Kansas Louis Stokes Alliance for Minority Participation (KS-LSAMP) grant via Kansas State University. And refreshments and snacks are provided through a grant from the Robert Noyce Scholarship Program via Fort Hays State University. For a schedule of upcoming topics, please visit dc3.edu/events/calendar/.