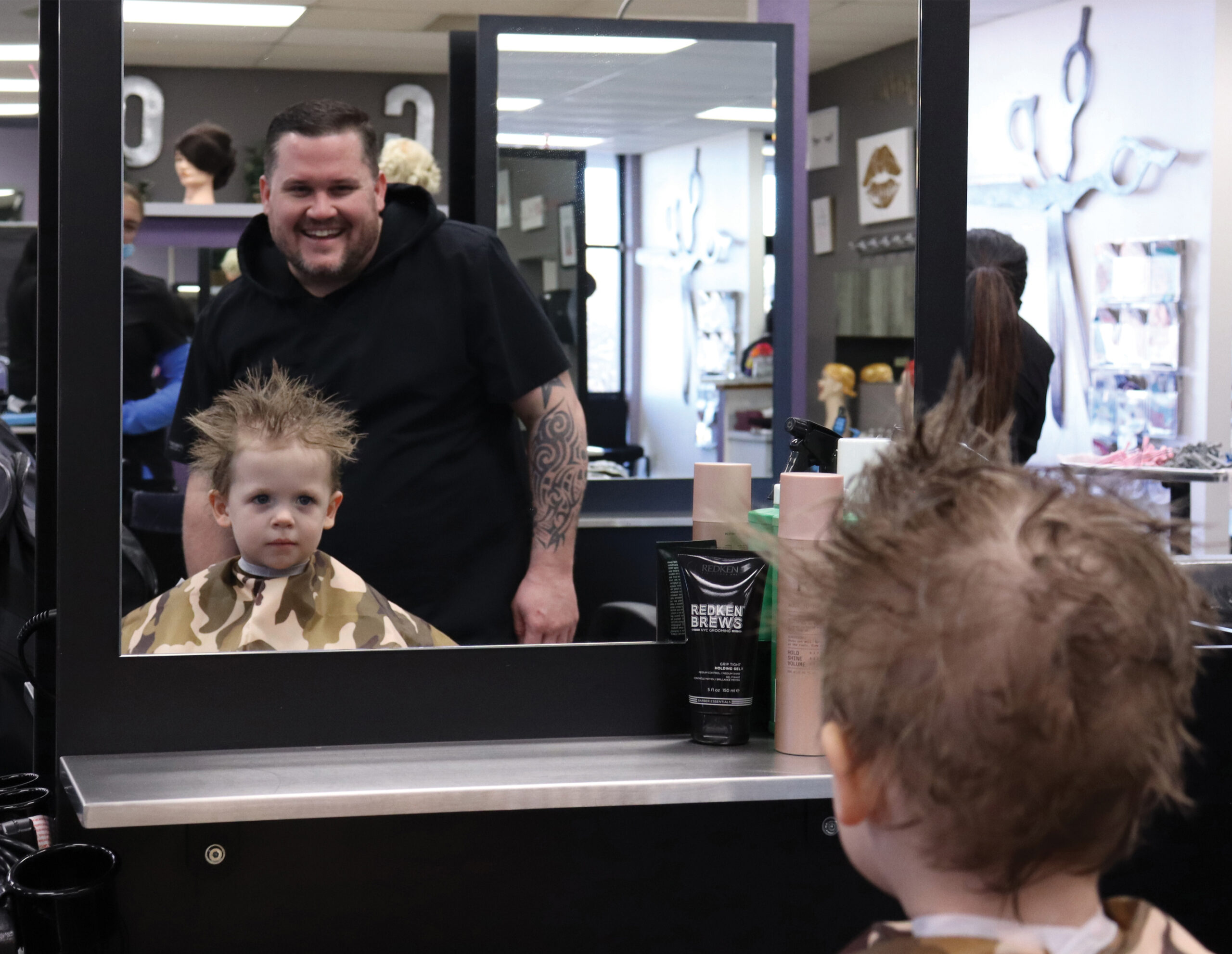 At the age of 33, Preston Stebens decided it was either now or never in regards to following his dream of cutting hair full time. So, after discussing the idea with his family—and leaving his current job—he enrolled in the Dodge City Community College (DC3) cosmetology program in early 2021.

However, the journey that brought him to DC3 actually started at another Kansas community college back in 2005.

“I ended up going to Hutchinson Community College in 2005 and went for a year up there. I played golf and went to college and just burned myself out,” Stebens said. “That’s when I decided that I wanted to get in the workforce.”

Stebens then decided to follow in his father’s footsteps and begin a career in the gas industry. So, for the next year and a half, he worked with British Petroleum, until he was laid off.

“I ended up moving to Wichita and went to work for Hawker Beechcraft , which was an air company,” Stebens said. “They provide airline parts now for Cessna Aviation.”

Although he said Hawker Beechcraft was a “really good job,” he got laid off there as well.

Because of these two work experiences, Stebens said his next step was to enlist in the U.S. Army to seek a job with more stability.

“Both of my grandpas were in the military. My mom’s dad was Navy, and my dad’s father was Army,” Stebens said. “As long as I can remember, they still rolled their underwear, socks, T-shirts, and folded the corners of the bed.”

However, Stebens’ time in the Army was short-lived. After breaking his foot twice within a one-year period, he was honorably discharged with a medical injury.

After the Army, Stebens got a job in the juvenile justice program for two years, before moving on to Koch Industries, in Dodge City, where his job was to make anhydrous ammonia fertilizer.

So, although his professions changed through the years, there was always one constant: He had a dream of cutting hair full time. And beginning in 2001, he began practicing on his friends and family.

In 2018, he married his wife Janae. Because they both had a child from a previous relationship, they were immediately a family of four. And two years later, that number would be five, when they welcomed their first child together.

“When we had little Owen, I was working out at the plant,” Stebens said. “I worked with really good guys, but if you’ve ever been around anhydrous ammonia, it is very scary stuff, and it can kill you.”

Because he was concerned with the safety of his current job, and he wasn’t “getting any younger,” Stebens decided it was finally time to pull the trigger on his dream of cutting hair.

“After Owen was born, I just at that time, really wanted to do hair,” Stebens said. “I knew that at 33 years old it was time to either continue doing what I was doing, or I needed to make a change, and I needed to go back to school and finish it.”

“Two days after I resigned, I came and talked to Miss Julie Taylor-Birney [DC3 Professor of Cosmetology] over at the college,” Stebens said. “I was enrolled the 10th of January and started classes on the 13th.”

Stebens said he found the college atmosphere a refreshing change of pace, compared to the volatile and often dangerous work environments he had experienced in the past. 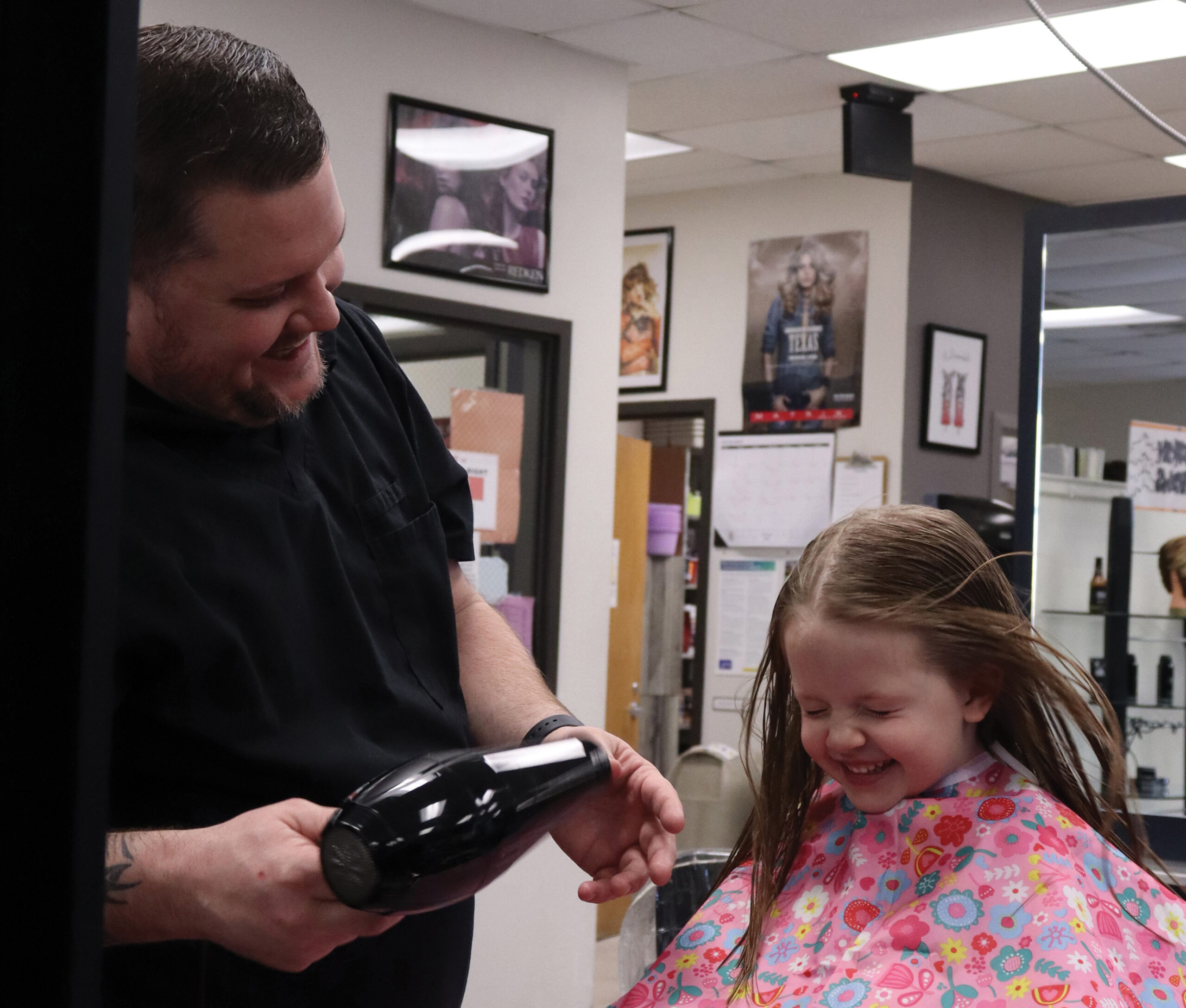 Preston Stebens enjoys a laugh with Olivia Fadenrecht, age 5, while blow-drying her hair on Feb. 9. [Photo by Christina Hall]

“It’s a breath of fresh air for me. I don’t have to worry about if I am second guessing what I’m doing or tell myself you know, ‘Is this really for me?’ It’s nice knowing that the years of hard work and saving has led me here,” Stebens said. “I’ve studied hair for the last 10 years on YouTube learning how to do different things, just having folks let me cut them free of charge as a hobby and practicing my skills has helped me to hit the floor running.”

Those who are not involved with the hair industry might not be aware of how much more there is to cutting hair and being a cosmetologist, he said. There is a surprising amount of science that is factored into learning the curriculum.

“We cover everything from some aspects of human anatomy to physics with chemical reactions, mixing chemicals, mixing colors, and then just general science and general education. The thing is you’re never not learning.”

Stebens credits the support from his wife for allowing him to manage his time and complete his cosmetology certification.

“My wife’s job has given me the opportunity to come back to school and finish this, and it was a joint decision between the both of us,” Stebens said. “We both knew what we were chewing off when we decided to do it. My wife, she’s working 60 plus hours a week just to help make sure that I have all the equipment that I need.”

Although the road to cosmetology certification has been challenging for the (now) 35-year-old father of three, he said the process has taught him how to manage a newborn child, complete school assignments, and be a husband all at once.

“The biggest thing is you have to study this stuff,” Stebens said. “I get my kids picked up. I get home at 4:30 p.m. I would play with them from 5 to 6:30 p.m., then we would make dinner, give baths until 8, and then get them tucked into bed by 8:30. After that, I would get a shower and then spend time with my wife when she gets home, plus do my homework and study.”

In addition to the wonderful support of his wife, Stebens said the DC3 cosmetology faculty and staff also have gone the extra mile to help him succeed.

“The staff over there have worked with me so well that it’s been extremely easy in a very difficult time,” Stebens said. “Dealing with sick babies and not knowing what’s wrong with them is tough. All you can do is stay home with them. So having a staff that understands that and is willing to work with you is exceptional.”

Julie Taylor-Birney, or as her students affectionately call her, Miss Julie, has worked at DC3 for the last 15 years as a professor of cosmetology. And she has taught and graduated more than 500 students in her time at DC3.

“Miss Julie has a mama goose feel, I mean, she doesn’t really act like an instructor or a boss,” Stebens said. “She acts like, ‘You guys are all under my wing, and it is my responsibility to train you and teach you, and I’m not going to let you leave until you’re ready.’ ”

Although she has taught hundreds of students through the years, she said Stebens stands out from the crowd.

“Well, he’s a good student. He’s a go-getter,” Taylor-Birney said. “He’s always willing to do anything for anybody, and he’s got a wonderful drive for the industry, too.”

And switching career paths as an adult is not something many parents envy doing, she said.

“Preston put his career on hold, and he’s still helping out with his children,” Taylor-Birney said. “He has really come in and given it his all to be able to learn the industry and give back to the industry as well. I hope that he would be an example for other male stylists who want to come in.” 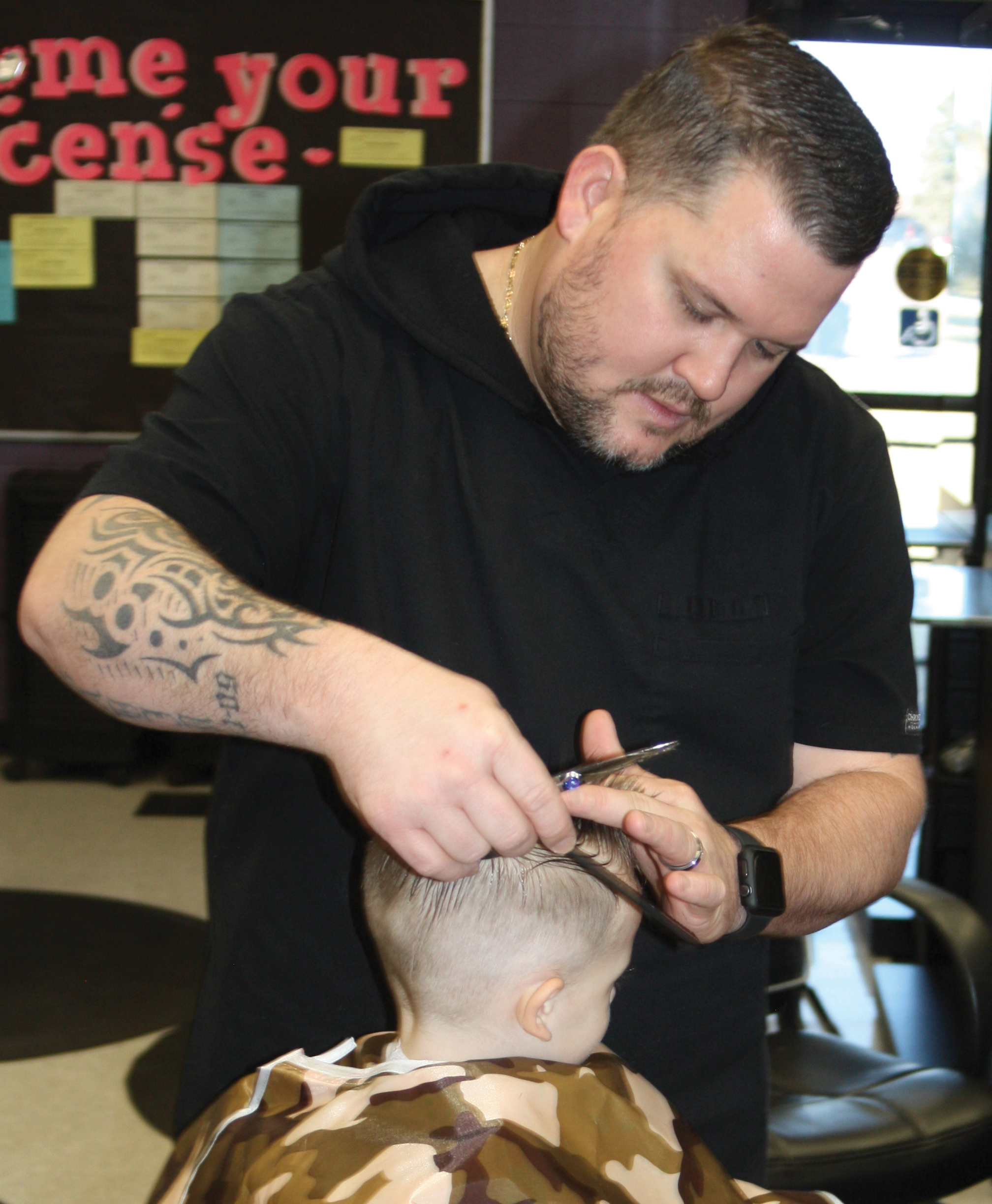 Preston Stebens puts the finishing touches on a haircut for Jance Fadenrecht, age 3, on Feb. 9. [Photo by Lance Ziesch]

As a nontraditional student, Stebens is about 15 years older than most of his classmates. And of course, he’s also married with three children.

“They’re always so chipper and happy. They don’t have a care or worry in the world,” Stebens said, referring to his younger classmates. “Several people over there call me Uncle Preston. I’m ok with that because it not only makes me feel a little bit more comfortable, but it just keeps it funny and relaxed.” Although Stebens acknowledges there is a slight stigma in cosmetology for males—due to it being a female-dominated field—he said this factor has not slowed him down.

“History would tell you that it is primarily a female industry, as far as the cosmetology program goes. But, if you look at the numbers, you are seeing a lot more women getting into barbering, and you’re seeing a lot more men getting into cosmetology,” Stebens said. “It’s a $2- to $3-billion a year business, and that’s what it comes down to for me.”

Taylor-Birney echoes that same sentiment. She said there is a lot of money to be made in hair, and Stebens is just one of many Americans who are now taking the chance to follow their dreams.

“Our industry is booming. I really think that when people were home because of COVID-19, they did a lot of soul searching and decided it was time to do something different,” she said.

So, what is next for Stebens? After passing his state boards for cosmetology in December 2021 “with flying colors,” and then completing his mandatory 1,500 hours of work in mid-February to earn his certificate from DC3, his next move is to open a shop in his hometown of Ashland, Kan.

In Ashland, he plans to help the family “replenish some of those funds that we’ve had to expire over the last year, and give my wife Janae a much-needed break.” And down the road, he plans to open shops in Dodge City, Garden City, and possibly Wichita.

“I want to come up with my own brand, my own product, especially for men. I want to improve the men’s line of pomade, facial hair, beard-oil products, and things like that,” he said.

“That’s one thing that I’m going to offer once we do get our own establishment up and going is having a full line of men’s products,” he said. “I think that’s something that’s really lacking in a lot of these places where the main focus is women’s hair.”

When he opens his own shop, Stebens said he will offer a discount to all first responders, active military, and veterans. He also will be offering free haircuts once a month for those who cannot afford them.

“I’ve always told my family and my wife that once I do get my certifications done, I’m going to commit one weekend a month, Saturday or Sunday, to giving out free haircuts to the homeless, or the less fortunate folks that maybe can’t afford a haircut. I am hoping I can get other people in the business to come out and give a little back, too.”

So although Stebens’ time at DC3 has come to an end, he said he has these words for anyone who might be considering cosmetology as a future career:

“My recommendation to anybody would be if you’re going to go to cosmetology school—and you’re within a reasonable distance to Dodge City Community College—you need to choose DC3, because you’re going to leave with a world-class certification,” Stebens said. “The staff here do such a great job covering different topics, and they give you every resource you can imagine. There’s zero reason for you to fail at DC3.” ¬

Editor’s Note: This story was originally published in the Spring 2022 issue of the Conquistador. The Conquistador, which is the official magazine of Dodge City Community College, is published once per semester. Copies of each issue are available on campus or online at dc3.edu/media2/magazine/.